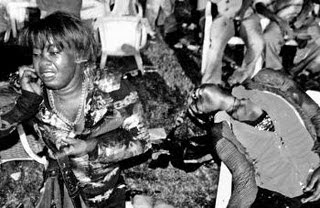 War on terror
On 7/ 11, horrific bombings in Kampala killed scores of innocent people, including an American, and wounded many others who had peacefully gathered to watch the World Cup. Shortly after this cowardly attack, a group called al Shabaab claimed responsibility.
This group is based in Somalia. For months, al Shabaab has been threatening to carry out attacks in eastern Africa, and if in fact they did commit this attack in Uganda, it would be their first attack outside Somalia. Confirmation of their responsibility would demonstrate that this terrorist group’s threat is expanding throughout Africa and could soon impact the United States.
To reduce and ultimately eliminate this risk, we have to address the conditions in Somalia that have bolstered al Shabaab, and by extension, al Qaeda. Somalia has not had a functioning central government for almost two decades and has been beset by lawlessness and instability. The country has been in a state of outright war since Ethiopia invaded several years ago, resulting in at least 21,000 deaths and more than 1.5 million persons being displaced.
Meanwhile, al Shabaab has used increasingly brutal tactics to maintain its control over local populations in southern Somalia - carrying out executions, chopping off hands and legs, and forcibly conscripting youth. They have sought to impose repressive social controls in the name of Islamic law, reportedly banning dancing at wedding ceremonies, listening to music on the radio, and playing or watching soccer.
To make matters even worse, al Shabaab has recruited some Americans to travel to the region and join their fight. In October 2008, a Somali-American from Minneapolis, in a coordinated attack by al Shabaab in Somalia, reportedly became the first-known suicide bomber with US citizenship. Late last year, the New York Times reported that roughly 20 young men from Minnesota had been recruited by al Shabaab to join the fight in Somalia.
This is very troubling news. Although the Obama administration is paying greater attention to Somalia, we still don’t have a strategic, long-term vision for the country.
Targeted strikes against some individuals in Somalia can be part of our counter terror strategy, especially if those individuals have clear ties to al Qaeda and pose a direct threat to the United States. But we cannot just rely on a strategy of killing the bad guys. We also must work to address the local conditions and divisions that allow al Shabaab to succeed. In Somalia, this means working to encourage political consensus and reconciliation among different groups, and supporting inclusive and functional governance.
Fighting terrorists is more than just a manhunt — you can pull out some weeds, but until you’ve addressed the conditions that enable them to grow, they will keep coming back. Weak states, chronic instability, vast ungoverned areas, and unresolved local tensions have created idyllic safe havens in which terrorists can recruit and operate. These are the underlying problems we need to address.
We need to place counterterrorism within a broader framework that includes support for a sustainable and inclusive peace, as well as the promotion of human rights, economic development, transparency, and the rule of law. We cannot afford to focus so much of our attention on Afghanistan while overlooking the gathering threat in places such as Somalia.
By implementing policies that address local problems and resolve related conflicts, we’ll have a better chance of reducing the instability that makes Somalia, and other countries in the region, a safe haven for al Qaeda and its affiliates. With this, we can finally get at the root of the problem.
Mr Feingold, a Democrat, represents Wisconsin in the US Senate. He is a member of the Senate Foreign Relations Committee and chairs its Subcommittee on African Affairs. He’s also a member of the Senate Intelligence Committee. Wednesday, July 21 2010 at 00:00 daily  monitor
Posted by Siad barre at 2:33 PM