An Open Letter to the AU Assembly of African Heads of State & Government Kampala, Uganda 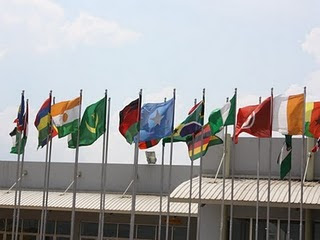 Maternal Heath, infant mortality, the scheduled primary focus of this 15th Ordinary Session of the AU remains important for the entire continent. However, the Somali issue seems to have “high jacked” this Summit and especially in the aftermath of the Kampala bombings.Understandably, the Government of Uganda remains shocked by this loss of life in its own capital. There is an international chorus to go after the perpetrators of the bombings. There are calls for AMISOM mandate change from “peacekeeping” to enforcement, UN takeover of AMISOM as well as a surge in AU troop’s levels up to 20.000.The sum total of these calls lead only to one direction: a robust foreign led military intervention and consequently, a military solution to the Somali conflict that keeps Sharif & Co. in power.But the question that begs an answer remains: Will another foreign led military intervention bring durable peace to Somalia? Lessons from history teach that surges in troop levels as well as military interventions in foreign lands, however robust, end in failure. Vietnam in the 1960s, Iraq and Afghanistan are such examples.Closer to home, the US-UN led military intervention in Somalia in the early 1990s ended in failure. The more recent Ethiopian invasion and occupation of Somalia-2006-2008 resulted in the ignonamus defeat of the Ethiopian forces.Foreign led military interventions do not bring durable peace to a country in a major conflict. On the contrary, killings, displacement of civilians and destruction become the order of the day.At the same time, external actors like neighbouring countries pursue different national interests and strategic objectives, in most cases at variance with the quest for peace. Most of the IGAD member States are an example in this regard and in relation to Somalia.

An expanded military intervention is the wrong prescription for Somalia. Like the previous attempts, this is bound to fail. Looking at Somalia only through the narrow prism of fighting terrorism will not promote peace in the country.Likewise, imposing on the Somali people, a dysfunctional inept and famously corrupt TFG that controls few blocks in Mogadishu is a wrong track. What is needed in Somalia is a political settlement of the conflict. And this can be done only by us Somalis. Any political settlement must premise on an all inclusive Somali owned peace process that must deliver durable peace.One outcome of such Somali owned process must result in a truly representative government of national unity. Such a government with be able to create the institutions of governance and must be accountable to its citizens and the world at large. The role of the AU and other members of the international community must be confined to the creation of an enabling environment for such a Somali owned peace process. A new military intervention in Somalia is not an option.
At this time of Uganda’s great loss and grief, cooler heads must prevail at this Summit.

I appeal to the Heads of State and Government at this 15th Ordinary Session of the African Union to step back from the brink of further internationalizing the Somali conflict. To give peace a chance, this Summit must support a Somali owned, all inclusive peace process.
The sanction of a military solution for Somalia will not be the finest hour of the African Union.
Amb. Ahmed Abdi Hashi  Email: xasharo@gmail.com
Former Somali Ambassador to the UN (2001-2005)   July 27, 2010
TF.SF We welcome your opinion Please send to us your article or opinion terrorfreesomalia@gmail.com

How Somalia slowly disintegrated into small pieces of troubled nations
Posted by Siad barre at 12:47 PM