Heavy fighting is taking place in WidhWidh and environs. The battle has started last night and still going on, Col. Yasin Tamad the SSC army chief said, speaking to the local media. Col. Tamad added that the SSC forces have successfully lodged out the occupying secessionist militia from WidhWidh town and that the fighting is raging at Korfa-pool, 60 kms. North-West of WidhWidh. 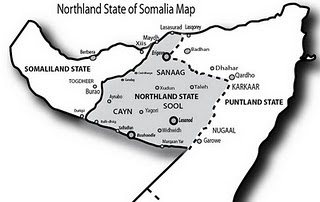 The SSC military commander has estimated the casualties they dealt on the secessionist militia as follows: minimum of 12 militias died, 25 wounded, a number of prisoners, and the destruction of many armored vehicles. He, also, confirmed few SSC soldiers who suffered a minor injuries and now being looked after by the medical services. Col. Yasin vowed that the struggle will continue untill the aggressors will voluntarily withdraw from the parts of SSC they occupy or orherwise be forced to do so.

Sool, Sanaag, and cayn Regions of Somalia (SSC) are UNIONIST territories in the north of Somalia which firmly oppose the secessionist One-Clan-Somalinad. SSC has formed their own regional administration with its executive, legislative, judiciary branches, and as well as security forces. The secessionist one Clan Somaliland has occupied parts of the SSC in october 2007. The SSC leadership and forces were since working on reversing the naked aggression of the secessionists. Meanwhile, The SSC leadership has repeatedly warned the secessionist clan and called them to peacefully withdraw their militias from the SSC territories and respect the neighborly cooperation and peaceful co-existence among Somali tribes, but with no avail.
Posted by Unknown at 5:23 PM