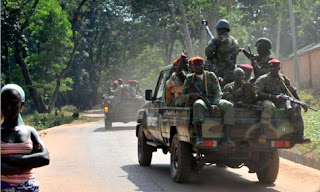 Kampala, Uganda - African Union Commission President Jean Ping said Friday a formal request had been sent to South African President Jacob Zuma for the deployment of peacekeeping troops to Somalia, the growing hotbed of terrorist cells in East Africa.Speaking in Kampala, the venue of the African Union Summit, 11 days after a terror attack killed 81, Ping said the global response to the Somali crisis was appalling, despite the threats to regional peace that the crisis in Somalia posed.'We have had the impression that the case of Somalia has been forgotten by the UN Security Council, which has the primary responsibility of peacekeeping in the world,' Ping said, adding that the Securi ty Council had an obligation to send a peacekeeping mission to Somalia to help bring back stability.He said the international community appeared only pre-occupied with the issue of piracy off-Somalia, adding: 'We are all members of the UN and we pay our contributions to the UN.'Ping said the Somali peacekeeping force was in need of tactical helicopters and other equipment, which he said should be provided by various countries.But he noted that even requests for military helicopters made by the combined Af rican Union, UN Force in Darfur (UNAMID) remained unfulfilled until Ethiopia provided the tactical helicopters.He said the AU planned to increase its payments for peacekeeping troops to US $10 00 per head to make the Somali mission attractive for African countries which plan to send troops to Somalia. Currently, the AU pays US$500 for every so ldier.The AU Commission boss said the plan to increase the payments would bring the AU peacekeeping rates to the same standard as the UN peacekeeping missions.Ping also revealed that Guinea has pledged to send a battalion to the AU peaceke eping mission to Somalia (AMISOM).Somalia, without a government for 19 years, has become the global breeding groun d for international terrorists, which include the Al Shabab militants, which claimed responsibility ofr the Kampala attacks.AMISOM, with some 6,100 troops mainly from Uganda and Burundi, have been able to protect the government installations, including the airport, the Presidential Palace and sections of the port but has come under constant deadly attacks.On Thursday, Somali insurgents killed two Ugandan troops serving the AMISOM.Meanwhile, the AU chief has urged the UN Security Council to revise an earlier r esolution that bars Somalia's frontline states from contributing peacekeepers to Somalia.'If the Security Council cannot revise this issue, then let them take the neces sary steps to deploy a peacekeeping mission to Somalia,' Ping said.Kampala - Pana 23/07/2010
Posted by Unknown at 3:27 PM