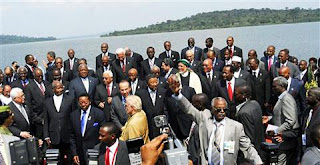 President John Evans Atta Mills on Tuesday said Ghana would consider contributing troops to the Africa Union Mission in Somalia following a request made by the 15th Summit of the Assembly of Heads of State and Government in Kampala, Uganda. He, however, said the final decision would be taken in consultation with the Ghana Armed Forces, based on the availability of human resources, equipment and the welfare of the soldiers.President Mills said this during an interaction with Ghanaians resident in Kampala, the Ugandan capital, where he attended the three-day Summit, which discussed largely the way forward for African countries and how to counter terrorist attacks that were surfacing in parts of the continent.He said the government was serious with its commitment to peace both at home and on the continent, adding that peace should be the number one priority of all African nations."Peace is our number one priority, and when we are in the position, we should help our brothers and sisters, who have been confronted with this scourge," President Mills said, adding that the Government would maintain the peace the nation enjoyed and would help her sister African nations to ensure that peace prevailed on the Continent.He underscored peace as pre-requisite for development and condemned terrorists and advised people, who did not want peace, to disabuse their minds of using violence as the only way to resolving problems.The summit was planned to discuss the role of governments in ensuring maternal, infant and child health in the development of the African continent, but the discussion on peace and security took centre-stage alongside the main summit theme in the wake of two separate bomb attacks that rocked Kampala city two weeks prior to the Summit.The two suicide bombing incidents, linked to Somali al-Shabaab insurgents, were seen as retaliatory moves to disrupt the holding of the Summit in Uganda for contributing troops to the Africa Mission in Somalia.The Summit was nearly moved away from Uganda for security reasons, but for the strong posture put up by host President Yoweri Kaguta Museveni, who ensured the beefing up of security during the period of the Summit.President Mills registered profound commendation for the government of Uganda for its courage to hold the Summit despite the terrorist threats.He expressed condolences to the bereaved families and condemned the dastardly acts that claimed the lives of 76 people.Part of the recommendations of the Summit was to reinforce the AU Mission in Somalia to which Ghana was approached to make contributions.
From Benjamin Mensah, GNA Special Correspondent, Kampala, Uganda
Somalia: Rough Road to Peace
Posted by Siad barre at 3:57 PM