Suspected Somali pirates to be arraigned in Va. 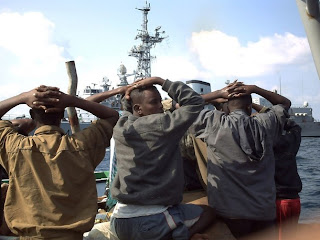 update on Pirate Suspects From Somalia Charged in U.S.,11 Somalis appear in US court on piracy charges -
NORFOLK, Va. — Eleven Somali nationals accused in separate attacks on two U.S. Navy ships are due in federal court in Virginia for arraignments on piracy and other charges.The defendants are scheduled to appear Wednesday before judges in separate courtrooms in Norfolk to enter pleas on the piracy charges and other counts contained in a superseding arraignment handed up earlier this month.Six of the men are accused in the April 10 attack on the USS Ashland. Five are charged in connection with an April 1 attack on the USS Nicholas. The Virginia-based ships were patrolling pirate-infested waters off Africa.The piracy charge carries a mandatory life term. All entered not guilty pleas at their previous arraignment.
Posted by Siad barre at 10:32 AM