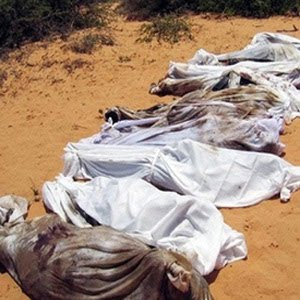 War, except in self-defense, is a failure of moral imagination. Bill Moyers
The Hawd and Reserved Area is a vast expanse of land that is mainly inhabited by Nomadic Somali clans that defy borders and nation states.  All Somali clans have a presence in the area because of its bountiful pastoral resources that favor large camel herds.  Besides its rich natural pastoral resources, the area is also endowed with oil and gas reserves.

The area has never seen peace since the British handed it over to Ethiopia before leaving the region and creating in their wake one of the longest running conflicts in the world.  Instead of uniting the Somali inhabited regions in the Horn, the British favored the feudal regime of Ethiopia over the pastoral indigenous population under their occupation against the recommendation of several members of the British Parliament who favored a united Somali speaking country in the horn.

The present day Ethiopian regime uses the same tactics of the Dictatorial Communist Regime of Mengistu Haile Miriam before it, to harass and subjugate the residents of the Hawd. T he Meles Regime recruits local mercenaries to levy unreasonable taxes against the nomads without providing them with any services in return. The area lacks proper schools, hospitals, clean water and the other necessary services.

About 10 days ago, the local mercenaries accompanied by a contingent of heavily armed Ethiopian soldiers paid one of their dreaded routine visits to a border town known as Buhodleh.  After their arrival, they immediately confiscated all the trucks in the area and detained the drivers who were getting ready to transport their usual loads of livestock to the ports of Berbera and Bosasso for export to the Gulf Countries.  The local elders did their best to negotiate the release of the trucks to no avail.

After negotiations failed to release the confiscated trucks upon which the town residents depended for a living, tensions started building up and matters finally came to a head last Friday. As people started preparing for the Muslim Friday prayers, the mercenaries drifted into the town in search of a mild narcotic known as Kat. Suddenly all hell broke loose and the soldiers started shooting at the unarmed population killing around 14 and wounding more than 30. No one knows what started the carnage, but the soldiers left behind destruction and death. They also caused an exodus of women and children from the town in search of safe heavens on the Somali side of the border.  The youth and some of the women did their best to defend the town against the soldiers killing 4 of them and capturing half a dozen.

The able bodied men who normally defend the town against such incursions were busy defending another town in Somalia known as Widwidh. The town was invaded by the militias of the secessionist regime of Somaliland whose leaders have vowed to use force against any towns and villages that do not support their secessionist agenda or refusing to participate in the coming presidential elections on June 26th.

Many analysts think that the two incidents are related somehow. It is well known that the Ethiopian regime uses the Somaliland and Puntland administrations to hunt down, jail, torture and rendition members of the Ogaden Liberation Front, ONLF, which fights for liberating the Hawd and Reserved areas from the clutches of the Ethiopian Regime.  The action of the Ethiopian soldiers in Buhodleh seems to be a payment in kind. The purpose of the illegal incursion was probably to put pressure on the Buhodleh population and distract them from defending their other towns against the incursions of the secessionist forces who want to show the world that their election is a success and has the support of all the clans in the former British Somaliland.

The illegal incursions of the Ethiopians into Buhodleh also coincided with the recent arrival of members of the Council for the Salvation and Unification of the Sool, Sanaag and Ayn regions in the town where they were welcomed enthusiastically by the local population who expressed their full support for the Council. The Council aims to unite the people of these regions to form a united front against the secessionist regime whose aim is to divide the Somali people and desecrate their beautiful flag that stands for the unity of all the Somali speaking peoples in the Horn of Africa despite the seemingly endless in fighting that has perplexed the world.

It is unfortunate that the world community is oblivious to the crisis that is unfolding in the area and the abuse of the funds provided by some European countries to help the Rayale Regime to hold a peaceful election. The actions of the Regime are contrary to the original purpose of these funds, to hold peaceful elections in areas that are willing participants. The SSC population are not willing participants and forcing them to participate will only lead to conflict. Such conflict has already started yesterday and caused a number of deaths and a score of wounded combatants on both sides. A number of non-combatant civilians were also caught up in the mayhem including women.
Somalia does not need a new round of bloodshed and the world community should start looking closely at the actions of the recipients of their funds that are meant for reconstruction and progress but blatantly diverted to military purposes.

Since the Federal government is toothless and cannot defend its regions against the Ethiopian and secessionist incursions, we call on the world community to wake up and start sending fact finding missions to the area and help stop a potentially destabilizing conflict.

Instead of listening to the Rayale Regime that paints these regions as fundamentalist enclaves that need to be incorporated into their secessionist realm, the international community should invite the political and traditional leaders of these regions for talks in Djibouti in order to pre-empt a new and senseless round of bloodshed in Somalia.

Whatever transpires, there is a need to protect the civilian population from the wrath of the Ethiopian regime and their secessionist cohorts.
Ali H Abdulla
E-Mail: aliegeh@gmail.com
... We put trust in a journalist's work that they are telling the truth, the whole truth, and nothing but the truth, so help them, God. ...

Somaliland Recognition: Why it won’t happen