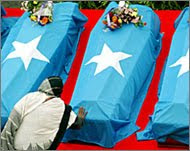 Stop Forcing SSC to Vote for Secession in so called Somaliland, Stop the Massacre

Urge the international community, individual countries, and international organizations to act on the following:,
1. Stop the secessionist so called Somaliland intimidation of unionist populations of Sool,
Sanaag, and Cayn regions of Somalia and forcing them vote for secession
2. Stop the blood shed and massacre happening in Widh Widh, Balli - Hadhac and
surrounding areas in Sool, Sanaag, and Cayn regions of Somalia
3. In order to achieve peace, peaceful co-existence between neighboring Somali clans/
tribes, and development cooperation, the secessionist group of so called Somaliland
must and should withdraw their aggressive militias from the SSC regions of Somalia