Al-Shabaab bans use of prayer beads 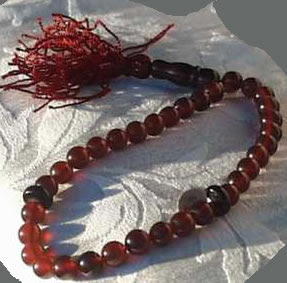 MOGADISHU, Sunday
Al-Shabaab and Hizbu Islam, the two Islamist groups vehemently opposing the Transitional Federal Government in Somalia, have prohibited the use of prayer beads in the areas controlled by the movements.
They assert that the practice of using beads is bid’a (new introduction to Islamic ways).
Although never declared, residents in areas ruled by Al-Shabaab and Hizbu Islam admit that hundreds of people were apprehended, warned or harmed for having and using the device.
In Bakara market, the largest trading centre in Mogadishu and a stronghold of the rebel Islamist groups, militiamen are on the lookout for users of prayer beads.
Meanwhile, fighting between Islamist al Shabaab rebels and Somali troops in the capital Mogadishu has killed at least 20 people and wounded 30 this weekend, a human rights group and medical officers said on Sunday.
Residents said al Shabaab insurgents have sought to advance towards the presidential palace for the past four days but government troops and African Union peacekeepers have been trying to repel them.
Posted by Unknown at 3:48 PM