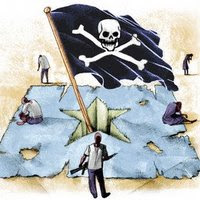 MOGADISHU, Somalia — Somalia's president says he has reversed his decision to fire the country's prime minister, tamping down a political dispute in the already fragile government.
President Sheik Sharif Sheik Ahmed in a statement released Thursday says he asked Prime Minister Omar Abdirashid Ali Sharmarke to continue his duties after reviewing the state of the country, which Ahmed says requires unity among its leaders.
Ahmed fired Sharmarke on Monday and dissolved the Cabinet. By law, the president may dismiss the Cabinet and prime minister if the government fails to obtain the required vote of confidence from Parliament. But several parliamentarians told The Associated Press the vote never took place.
Posted by Siad barre at 6:26 AM