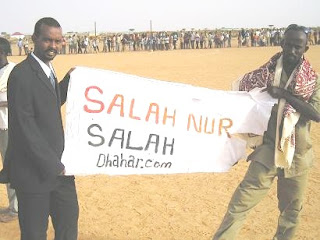 Bosaso, (Dhahar) - Thousands of people holding Somali Public Radio (SPR) billboards and waving the Somali flag cheered wildly in an effort to welcome American Somali delegates lead by Mr.Salah Donyale. Mr. Donyale, an MBA graduate from Concordia University and a senior corporate tax auditor heads a Minnesota based organization which aims to cater a modern media tune that abides by international media regulations.
Soon to be launched are networks of public radio stations in Puntland. It will feature a diversity of programs such as sports, science and technology, public health, social development and the promotion of human rights and democracy.

The new radio project is slated to be operated from five major cities in Somalia: Bosaso, Badhan, Ceerigaabo, Garoowe and Dhahar. Its satelite receptions are expected to reach millions of listeners all over Somalia, East Africa and neighboring regions.

Mr. Salah Donyale landed at Bosaso International Airport early friday where he was welcomed by a huge enthusiastic crowd. He was then escorted into Juba Hotel in Bosaso by Puntland officials and several dignataries who traveled from around Somalia.

The main Headquarter of the new Somali Public Radio (SPR) will be based in Dhahar city of the Haylaan region. It will then operate a network of three to five stations across Somalia. The Public Radio network prides itself as revolutionary and a high-tech initiative. It aims to enrich its listeners with highly reliable and relevant stories on global and local issues and to serve as a temporary solution to the absence of a much-needed public infrastructure.