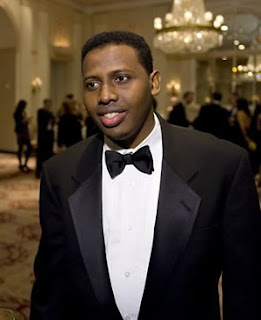 Congratulations My Friend: I'm so happy for you!
NAIROBI — Agence France-Presse's Somalia correspondent Mustafa Haji Abdinur has been awarded the CNN Multichoice African Journalist of the Year Award in the Free Press category.
Abdinur, 28, who has been AFP's Mogadishu-based correspondent since 2006, was among several African journalists recognised at the ceremony in the Ugandan capital Kampala on Saturday.
"Friends, I live in a country whose name has unfortunately become a synonym for lawlessness, where human life is not worth a lot and where press freedom simply does not exist," said Abdinur.
He was chosen "for his work in Somalia including the 'Peace Journalism' initiative which he launched with the help of fellow Somali journalists earlier this year," organisers said.
The CNN Multichoice Free Press Africa Award has previously been presented to the late Deyda Hydara from Gambia and the imprisoned Eritrean journalist Seyoum Tsehaye Musa Saidykhan.
The CNN African Journalist of the Year Award was founded in 1995 by Edward Boateng and the late Mohamed Amin to recognise and encourage excellence in journalism throughout Africa.
In November 2009, Abdinur won the Committee to Protect Journalists' (CPJ) International Press Freedom Awards.
Posted by Unknown at 3:59 PM