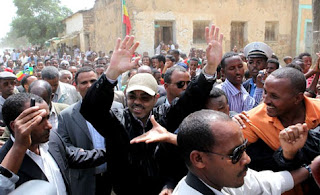 ADDIS ABABA, Ethiopia — Provisional results showed Ethiopia's ruling party has won national elections, officials said Monday, as a U.S. rights group said the weekend ballot had been corrupted by irregularities.
The Ethiopian People's Revolutionary Democratic Front and its allies were ahead in the nine regions that have reported results, out of a total of 11, board chairman Merga Bekana said.
"As far as the provisional result is concerned, the EPRDF has winned," Merga said.
Final results will be announced in late June, officials have said.
Opposition leaders could not be reached immediately for comment on the results, though they had complained previously of vote-rigging and intimidation on election day.
The election board chairman also said the ruling party had won 20 of the capital's 23 parliamentary seats, with only two left to report results in Addis Ababa. There are 546 assembly seats in all.
New York-based Human Rights Watch criticized Sunday's vote as corrupted by pre-election irregularities, including telling voters they could lose food assistance, public-sector jobs, loans and educational opportunities if they voted against the ruling party.
"Behind an orderly facade, the government pressured, intimidated and threatened Ethiopian voters," said Rona Peligal, acting Africa director at Human Rights Watch. "Whatever the results, the most salient feature of this election was the months of repression preceding it."
European Union observers said that while Sunday's vote was peaceful, they had received reports of irregularities, both of a technical nature and from opposition candidates. They said they would release a report on the election Tuesday.
More than 70 percent of the country's 32 million registered voters cast ballots, the EU observers said.
Ethiopian election officials said they witnessed no irregularities, and government spokesman Bereket Simon said the election was free and fair.
"It is sad to hear that while the election officials have said Ethiopians voted in a democratic way, Human Rights Watch, which has nothing to do with the election observation, is declaring our election fraudulent," he said. "But the good thing is the people of Ethiopia have voted and no one is going to take their vote away from them."
Analysts had predicted an easy win for the ruling party, led by Prime Minister Meles Zenawi, a U.S. ally now poised to get five more years of power after he seized control of the Horn of Africa country in a 1991 coup.
Sunday's vote had been closely watched by international observers after a contentious 2005 election, in which the opposition won an unprecedented number of parliamentary seats only to endure police crackdowns and the killing of 193 demonstrators after the votes were counted.
Since then, the opposition and some analysts say the government has systematically stifled the competition while limiting the media and restricting aid groups from working on human rights issues.
Ethiopia is frequently criticized for its human rights record, including by the U.S. State Department, which in a March report cited reports of "unlawful killings, torture, beating, abuse and mistreatment of detainees and opposition supporters by security forces, often acting with evident impunity."
Still, the U.S. considers Ethiopia an ally and provides billions of dollars in foreign aid. Both countries want to curb Islamist extremism in Somalia, Ethiopia's unstable neighbor to the east.
Posted by Unknown at 4:12 PM