Ethiopian ruling party expected to win May 23 poll, Ethiopia tackles ghosts of elections past, Repression Is Alleged Before Vote in Ethiopia 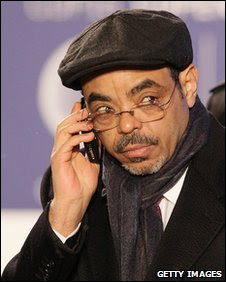 ADDIS ABABA (Reuters) - Ethiopia's ruling party says it will win a resounding victory in Sunday's national elections, thanks to sustained economic development in the Horn of Africa nation that has reduced poverty and improved infrastructure.
The opposition admits it has little chance of victory, but says that's because the ruling party of Prime Minister Meles Zenawi has tightened its grip on power since the last election in 2005 and routinely intimidates and harasses critics.
In 2005, an opposition coalition challenged the ruling Ethiopian People's Revolutionary Democratic Front's (EPRDF) victory and riots broke out in the capital. Security forces killed 193 protesters and seven policemen died.
Analysts say the EPRDF is desperate to avoid a repeat that could damage the reputation of Meles on the international stage and has been stifling opposition across the country through the security apparatus and local government officials.
The main opposition challenge this time comes from a coalition of eight parties from across regional and ethnic lines, united chiefly in their desire to drive out the EPRDF.
There has been little debate about policies ahead of the poll, seen almost as a referendum on the nearly 20-year rule of Meles and the EPRDF, a period that has brought stability and economic development after years of brutal dictatorship.
"This is not a sensational election, not an exciting one like we've seen in Africa over the last couple of years," said Mehane Tadesse, an economist and editor.
"There is a kind of sensible silence, mainly in the capital city. Partly because the results are more or less known and then the past is also very heavy, particularly the memory of the last elections," he said.   more..


Ethiopia tackles ghosts of elections past

Repression Is Alleged Before Vote in Ethiopia