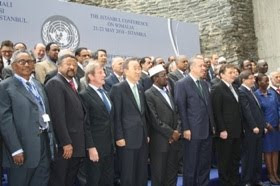 AP – U.N. Secretary-General Ban Ki-moon, left and Turkish Prime Minister Recep Tayyip Erdogan attend a news …
By SELCAN HACAOGLU, Associated Press Writer Selcan Hacaoglu, Associated Press Writer – Sat May 22, 1:48 pm ET
ISTANBUL – Dozens of nations pledged Saturday to help Somalia build a strong police and military, achieve peace and stability and eradicate piracy that has plagued international maritime trade.
The countries, meeting at a U.N.-sponsored conference for Somalia, said that strengthening law enforcement in the impoverished and lawless African nation was essential given the chaotic situation and deepening divisions among militant groups. There were, however, few concrete pledges.
"If we do not tackle the basic causes onshore, we will never be able to stop the piracy offshore," U.N. Secretary General Ban Ki-Moon said at the end of the conference in Istanbul. "Despite the risk...the U.N. and the international community will not stand by and watch Somalia's struggle alone."
Somalia has been a state of anarchy since 1991, when warlords overthrew longtime dictator Mohamed Siad Barre and then turned on each other. Piracy is flourishing off the coast, while insurgents with alleged links to al-Qaida launch daily attacks. The weak U.N.-sponsored transitional government, meanwhile, controls only a few blocks of the capital, Mogadishu, with the help of 5,300 African Union peacekeepers.
Political turmoil erupted this week as President Sheik Sharif Sheik Ahmed fired Prime Minister Omar Abdirashid Ali Sharmarke only to reverse his decision Thursday, saying the country needed unity among its leaders.
Ban said it was time for the international community to "redouble our efforts" to help Somalia, and that the transitional government represents the country's best chance in years to escape from the endless cycle of war and humanitarian disaster.
French Foreign Minister Bernard Kouchner also said the Somali prime minister must not be "left alone."
"Let's be close to the people. This is risky, uneasy and difficult," Kouchner said, also voicing support for the establishment of an international court to try pirates.
The conference participants — representatives of 55 nations and 12 international organizations — expressed "grave concern over the increase in acts of piracy and armed robbery at sea against vessels off the coast of Somalia," according to a joint statement released at the end of the meeting.
The meeting was attended by members of Somalia's government, but not of the opposition, which is accused of having ties to insurgents.
The joint declaration said that while "a bright future for Somalia is possible," the international community would offer support. Turkey signed a deal paving the way to provide military training to Somali soldiers.
"We send a clear and strong message to the people of Somalia that they are not alone in the search for peace, reconciliation and prosperity after so many years of poverty, hardship and suffering," the declaration said.
Ban thanked those offering training, but also said that "we need to do more to pay them after that training."
The Somali president assured the conference that his country's leaders were able to iron out differences, and also promised transparency in the face of widespread allegations of corruption. The various clans and factions do not always agree on policies regarding combatting Islamic insurgents.
"We promise to be transparent," Ahmed said. "We're committed to transparency and all the assistance given to us are guaranteed by us." He later refused to answer a question about whether he would work with the prime minister in the next government, saying only that Sharmarke was "a very distinguished person."
Because Ahmed dissolved the Cabinet last week when he initially sacked the prime minister, a new government must be formed.
"We've some preparations," Ahmed said. "Soon, some very good things will happen."
Spain will host the next Somalia conference in Madrid in September.
___