US travelers to terror havens a growing worry 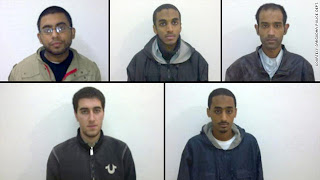 WASHINGTON -- The failed Times Square bombing exposed the unsolved threat hidden among the massive flow of Americans going abroad: Homegrown jihadists who travel undetected to terrorist havens, link up with insurgents and carry back plots aimed at the homeland.
As the U.S. and other countries put more pressure on militants overseas, terror groups are now more actively wooing Americans, who don't face as much scrutiny when they travel, U.S. authorities say.

"I think there is a calculated decision being made by some in the al-Qaida leadership to look for people who might have more access" to the U.S., said Air Force Gen. Gene Renuart, former head of U.S. Northern Command, in an interview with The Associated Press.
"Al-Qaida is having difficulty growing jihadists in some of the areas where they have safe haven because of the pressure that has been put on them, so they seem to be looking for people who have no previous connections and trying to radicalize them," said Renuart, who retired this week after 39 years of military service.
The Times Square case is reinforcing concerns in Congress about gaps in the government's patchwork system to find and track homegrown militants on the move. These citizens, who quietly take on jihadi beliefs but have no apparent terrorist background or ties, set off no alarms as they cross in and out of the U.S.
"It goes right to the heart of the challenges we face," FBI spokesman Paul Bresson acknowledged. "But I can tell you we have dedicated people working tirelessly and around the clock using all available lawful tools and methods to identify and disrupt potential plots."
Every year hundreds of thousands of U.S. citizens go back and forth to countries known to house terror groups and training camps, such as Pakistan, Somalia and Yemen.
The U.S. system for finding and tracking homegrown terrorists among them depends largely on constantly updated travel records, screening by sharp-eyed border and law enforcement officials, and some intelligence-sharing with foreign governments.
U.S. Customs and Border Protection keeps records on people who travel in and out of the U.S. Officers can pull up information to see who a known suspect was traveling with on a certain date.
But unlike the recently upgraded air security system, which is aimed at terrorists flying on U.S.-bound airlines, the ability to find and track the movements of homegrown jihadis is sharply limited by the sheer volume of travelers and the rights of Americans to travel freely.
In the Times Square case and in a spate of homegrown terrorist plots over the past year, the suspects were not known to be extremists when they went abroad, and their names were not on U.S. watch lists.
Times Square bombing suspect Faisal Shahzad, a Pakistan-born U.S. citizen, had traveled to Pakistan last year and returned to America in February. But officials say there was no information available that would have led authorities to suspect he was involved in terrorist activity.
New York subway bomb plotter Najibullah Zazi was also able to travel to Pakistan under the radar because he too was living in the U.S. legally and had no record of terror connections. The Afghan-American al-Qaida recruit from a Denver suburb pleaded guilty in February for leading a plot to bomb the New York subway system.
Others who have gone abroad to link up with terrorist networks include Long Island native Bryant Neal Vinas, who pleaded guilty to terrorism charges in January. Five Washington area men now on trial in Pakistan for planning terrorist attacks also are accused of such activities.
Associated Press writers Eileen Sullivan and Adam Goldman in Washington and Kathy Gannon and Zarar Khan in Islamabad contributed to this report.
Full Story1 | 2 | Next »
Posted by Unknown at 6:33 AM