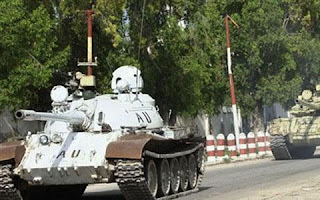 Tanks of the African union peacekeepers in Somalia rolls on the street of Mogadishu, Somalia to assist government forces during clashes with Islamist insurgents in southern Mogadishu's Karan neighborhood, 1 Jul 2010.
Preliminary meetings are under way for a summit of African leaders in the Ugandan capital, Kampala, a little more than a week after the city was shocked by twin suicide bombings that killed 76 people. The bombings have placed Somalia at the top of an agenda nominally dedicated to improving health care for Africa's infants and pregnant women.

The theme of this week's gathering is about saving the lives of women in childbirth. One in 16 women in sub-Saharan Africa dies while giving birth, compared to one in 4,000 in the developed world.But with memories still fresh of the bomb attacks, the summit's attention is turning more to upgrading the rules of engagement for A.U. peacekeepers in Somalia. The summit host, Uganda's President Yoweri Museveni says he wants authority for the mostly Ugandan A.U. mission in Somalia to step out of its peacekeeping role and actively pursue the al-Qaida linked Somali extremist group that claims responsibility for the blasts. A.U. Peace and Security Commissioner Ramtane Lamamra says heads of state will be looking at several options. "There are a variety of issues that can be covered by the rules of engagement. If properly equipped, and if mobility is available, as well as other assets and enablers, you could very much in the exercise of the legitimate right to self-defense, engage in some very bold actions aimed at preempting the actions of the terrorists and insurgents," he said.Lamamra says the summit will consider giving AMISOM commanders on the ground broader authority. "We would, as the political leadership would also be guided by the advice of the force commander and his colleagues on the ground. We would certainly want to give him leeway so he could accomplish his mission in the most comfortable manner. The mission is quite difficult, the mission is complex, but we have every confidence in the good people who are on the ground there," he said.The commissioner says if sufficient logistical support is available, another 2,000 AMISOM troops should be in Somalia by September. The United States, the main financial and logistical backer of AMISOM, indicated last week it would be willing to support the proposed buildup. The summit will also consider a recommendation from east African leaders that AMISOM's authorized strength be raised from 8,000 to as much as 20,000. That figure could include troops from neighboring countries such as Ethiopia and Kenya.A U.N. Security Council resolution discourages neighboring countries from contributing troops to AMISOM, since they could be seen as an irritant. Ethiopia sent troops to support Somalia's transitional government in 2006, but pulled them out after their presence was portrayed as being part of the problem rather than part of the solution.But following the Kampala bombings, there is a renewed sense that front-line states such as Ethiopia and Kenya should join AMISOM, since they would be most directly threatened if Somalia were to become a base for al-Qaida. Nicholas Bwakira of South Africa's Institute for Security Studies, a former A.U. special envoy to Somalia, is among those who favor deployment of Ethiopian and Kenyan troops. He says the argument that Ethiopian troops were an irritant has proven to be false. "It has been proven that was purely propaganda. Because during the negotiations, al-Shabab was saying if Ethiopians withdraw, they will stop fighting, but they have increased the fighting, so Ethiopia was the pretext not the cause," he said.The pre-summit meetings attracted mostly A.U. commissioners and ambassadors, heads of state are not expected until late in the week. Outside dignitaries attending include Mexican President Felipe Calderon, who will be the host of the next climate summit later this year, Palestinian Authority President Mahmoud Abbas, and U.N. Secretary General Ban Ki-moon. voa
Posted by Siad barre at 7:55 PM