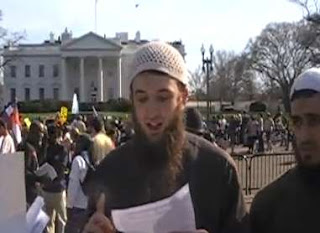 ALEXANDRIA, Va. — A Virginia man best known for posting an online attack against the creators of the animated series "South Park" will spend at least one more day in jail on unrelated charges that he twice tried to join a Somali terror group linked to al-Qaida.
Zachary Chesser, 20, of Oakton, Va., made an initial appearance Thursday in U.S. District Court on charges of providing material support to the al-Shabab terror group, which earlier this month claimed responsibility for a July 11 bombing in Uganda that killed more than 76 people watching the World Cup.
Chesser did not have an attorney and requested a court-appointed lawyer. Dressed casually and shorn of the long beard that was a feature in Internet videos in which he appears, he otherwise did not speak in a hearing that lasted barely two minutes. He is being held pending a detention hearing scheduled for Friday. Prosecutor Gordon Kromberg said Chesser faces a potential maximum of 15 years in prison.
FBI agents say Chesser twice tried to travel to Somalia to join al-Shabab as a fighter. An FBI affidavit states that the first attempt occurred in November, when he planned to travel with his wife to Kenya and make his way to Somalia, possibly by speedboat. But Chesser wrote in his journal that his mother-in-law took his wife's passport and wouldn't give it back.
The most recent attempt occurred on July 10, when he took his infant son with him and tried to board a flight from New York to Uganda. An FBI affidavit states that Chesser planned to take his son on the flight with him so he would appear less suspicious. He was denied entry to the flight and told he was on the no-fly list.
According to the affidavit, Chesser told FBI agents that while he intended to join al-Shabab on July 10, he changed his mind after the July 11 bombing in Uganda. But FBI agents expressed skepticism about Chesser's purported change of heart, noting that he had renounced extremist views in FBI interviews on multiple occasions, going back to May of 2009.He is also accused of using the Internet to spread propaganda on behalf of al-Shabab members.Chesser gained notoriety earlier this year for warning that the creators of the animated series "South Park" risked death by mocking the Prophet Muhammad.A court affidavit also states that Chesser corresponded with the radical cleric Anwar al-Awlaki last year, and received two responses. Al-Awlaki is a U.S. citizen now living in Yemen who was recently designated a terrorist by the U.S. government. Al-Awlaki is believed to have corresponded with several alleged terrorists, including Maj. Nidal Malik Hasan, the U.S. Army psychiatrist accused of killing 13 people in November at Fort Hood, Tex.Federal public defender Michael Nachmanoff was appointed to represent Chesser on Thursday, along with Brian Mizer, a former Navy officer who represented Salim Hamdan, the one-time driver for Osama bin Laden, in a military trial at Guantanamo Bay in 2008.
Nachmanoff declined comment Thursday.