Uganda leader calls for 'terrorist sweep' at summit. “Let them go back to Asia or the Middle East where I understand some come from,” Museveni said at the opening of the three-day summit. 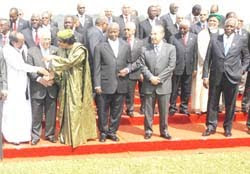 Agence France Presse
KAMPALA: Uganda’s president urged African Union (AU) leaders at a summit to “sweep the terrorists” out of Africa on Sunday, following recent deadly attacks by Somalia’s Al-Qaeda-linked Al-Shabaab rebels.
“Let us now act in concert and sweep them out of Africa,” Yoweri Museveni said, referring to the perpetrators of the July 11 blasts in Kampala that killed 76 revelers watching the soccer World Cup final.
“Let them go back to Asia or the Middle East where I understand some come from,” Museveni said at the opening of the three-day summit.
More than 30 heads of state from the AU’s 53 members gathered amid unprecedented security in the Ugandan capital, for a debate on boosting the organization’s troops levels in Somalia and crushing the Islamist insurgents in the war-torn nation top of the agenda.
The AU summit observed two minutes of silence for the victims of the attacks two weeks ago.
“The African Union stands with you, my brother President Museveni, and with the people of Uganda,” Bingu wa Mutharika, Malawi’s president and current chairman of the AU, said in his opening remarks.
Museveni also said many of the organizers of the attacks in Kampala have been arrested.
“Their interrogations have yielded very good information,” he added.
Ugandan authorities have not been precise about the number of people detained for their suspected involvement in the blasts. Last week the inspector general of the Uganda police force, Kale Kayihura, put the figure at “more than 20” but several of those individuals have since been released.
The two bombings were intended to bully Uganda into pulling out of the AU mission in Somalia (AMISOM), the last thing standing between Al-Shabaab and total power.
Uganda reacted by saying it could send 2,000 more troops and urged more decisive international support, while the embattled Somali government argued the attacks were evidence Somalia required the world’s attention.
“Guinea is ready to immediately dispatch a battalion,” AU chief Jean Ping said on Friday. “We are going to quickly top the 8,000 mark … I think the current trend could take us over 10,000.”
Diplomats in Kampala say Angola, Mozambique and South Africa may also pledge troops. Current deployment from these countries is just over 6,000 Ugandans and Burundians.
Al-Shabaab’s leadership has proclaimed its allegiance to Osama bin Laden and the group’s first bomb attacks outside Somalia renewed fears that the Horn of Africa country could become a new safe haven for Al-Qaeda.Troops from the United States and the United Nations have previously not been able to crush the insurgency in Somalia, which has been without an effective government for two decades.
Eritrea, which is under international sanctions and has been accused of supporting Al-Shabaab, argues that the Islamist insurgency needs to be engaged at the negotiating table rather than on the battlefield.
Al-Shabaab – as well as Mogadishu residents and rights groups – have criticized AMISOM for causing civilian deaths by shelling targets in densely-populated areas.Analysts have warned a beefed up AMISOM mandate could make things worse.“We are quite worried about the consequences of such an operation, because if they are engaged in quite an indiscriminate manner, they run the risk of playing in the hands of the Shabab,” the International Crisis Group’s Ernst Jan Hogendoorn said.The continent’s leaders are also expected to discuss the future of Sudan, where the oil-rich southern region is due to hold a referendum on independence in January.Sudanese President Omar al-Bashir stayed clear of the summit, AU sources said. The International Criminal Court recently added genocide charges to Bashir’s indictment over the war in Darfur and Uganda. A member of the court would have been compelled to arrest him.
Posted by Siad barre at 7:07 PM