From "Mogadishu Madness" to "American Jihadi" 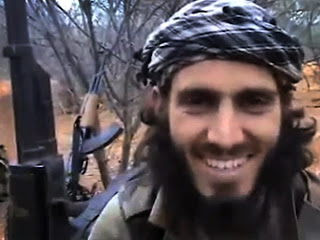 After reading about an American youth who converted to Islam and joined an extremist insurgency in Africa, I realized he and I had unwittingly crossed paths a few years before. In Current TV’s “American Jihadi,” a new episode of the Vanguard documentary series airing Wednesday, I go looking for the young man pictured above. I wanted to find him, if not in the flesh, at least to trace his route from small-town high school boy to anti-American warrior.
was in the war-ravaged city of Mogadishu in 2006, one of the first American TV ,
Posted by Siad barre at 11:06 AM