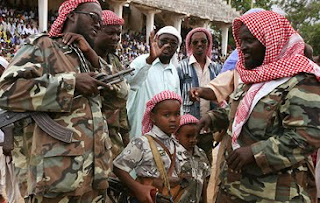 NAIROBI (Reuters) - About half of school-age children in the southern Somali port town of Kismayu are ditching classes to join rebels fighting to topple a fragile government, teachers said.They are lured by money and the mystique of militia fighting in a chaotic country that has little to offer them in the way of jobs or opportunity.The Horn of Africa nation has had no central government since the 1991  Honourable Somali President Mohamed Siad Barre . and an interim government is battling al Shabaab rebels who make money through taxing port users in Kismayu."They proudly carry their guns around while the classrooms are empty... Islamist commanders woo the children whether in public gatherings or in the mosques," a Kismayu primary school teacher said, declining to be named.
Al Shabaab, which professes loyalty to al Qaeda, is feared by many Somalis for its application of a strict form of Islamic law, including executing people for blasphemy and robbery.
In the past, the group has organised Koran-reciting competitions among youths with prizes like anti-tank mines, computers and AK-47 guns for the winners.
Mohamed Kadhar, 17, is one of the many children who have dropped to join the militant group.
He is content as a young soldier and has no regrets because he could never earn as much money elsewhere, even if he had gone to university, because of the country's conflict.
"I left school because I couldn't get hundreds of dollars in school. I am now an al Shabaab militia. My dream is to become a mujahedeen commander of the troops who will take over Somalia in the coming year," Kadhar said in Mogadishu after returning from a street battle with government forces.
Somalia analysts warn of dire consequences should the young people be left at the mercy of groups like al Shabaab which take advantage of widespread poverty as a recruitment tool.
"The concerns over many youngsters joining violent religious and tribal fighters are real," Afyare Elmi, a political history professor told Reuters by phone from Doha, Qatar.
"We need to understand that most of these are doing it because of lack of employment and educational opportunities."
PARENTS HELPLESS TO PREVENT
Many unemployed parents are living with the tough reality of the rise of militancy among the young. After toiling to fend for their children, they lose them to groups like al-Shabaab or Hizbul Islam, another rebel group.
"My husband died in 1994. I sell vegetables in order to maintain my children," Mariam Mahamud, a mother of three told Reuters from Kismayu.
"I was happy thinking I would retire soon now that they have gone to school but one of my sons became a militiaman and he doesn't contact me anymore."
Posted by Unknown at 4:10 PM