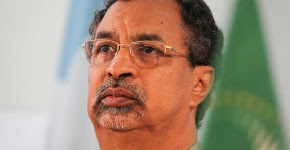 Mogadishu (terrorfreesomalia) The Special Representative of the Chairperson of the African Union Commission (SRCC) for Somalia, Ambassador Mahamat Saleh Annadif held a series of meetings with several government ministers, during which plans for AMISOM and the future of Somalia were discussed.
Today Ambassador Annadif met with Justice and Constitutional Affairs Minister, Farah Sh. Abdulkadir Mohamed as well as the Minister of Gender and Human Rights, Khadijo Mohamed Diriye at the AMISOM Headquarters in Mogadishu.
At the meeting with the Gender Minister, Ambassador Annadif applauded efforts by the Federal Government of Somalia in working towards the empowerment of women.
“I recognise the steps taken by your ministry in ensuring that Somali girls and women are safeguarded and empowered. AMISOM will continue to support such efforts towards gender empowerment, as well as promotion of human rights,” he said.
Yesterday, Ambassador Annadif met with the National Security Minister, Abdikarim Hussein Guled. The discussions focused on the planned operations by AMISOM, aimed at ensuring improved security in Somalia.
“2014 is a decisive year for AMISOM and we look forward to working even closer with the Federal Government of Somalia to ensure that elements of insecurity are eliminated,” said Ambassador Annadif.
Ambassador Annadif reiterated that the strong working relations between AMISOM and the Somali government would be further strengthened through meetings such as these, enabling the two entities to work together more effectively.
Posted by Unknown at 4:56 PM