Mr. President, Turn it Around 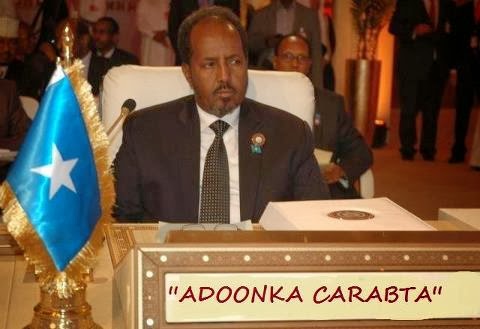 President Hassan Sheikh Mahmoud
When President Hassan Mahmoud took office in Sept 2012, like most of us, I thought finally Somalia will solve at least its most pressing issues: The lack of an accountable government, security, Somalia’s global image, and the economic problem in the country. Of course I wasn’t naïve to believe that these problems will be solved in fifteen-months or in that case in two years; however, I had the cautionary understanding and expectation that at least the president will put the foundation for a successful government, and strengthen the government’s reach. But today it seems like the president is slowly losing everything that his predecessors fought hard to create, let alone President Hassan strengthening and building the foundation of a successful country, and I say that as a concerned citizen.
Have you heard of Fetridge’s infuriating law or Murphy’s law? Well, let’s see what these laws state. Fetridge’s law states: everything that is supposed to happen wouldn’t happen when you need them the most. On other hand, Murphy’s law says: everything that could go wrong will go wrong at the worst moment. Combine these two laws and you will have a pretty good picture of what’s happening now in Somalia: everything that we hoped to happen isn’t happening, and everything that could possibly go wrong is going wrong in the country.
Take for example Al-Shabaab’s resurgence in Mogadishu. The group has resumed its nighttime mortar shelling of the city which has been absent since Sheikh Sharif was the president and the group withdrew from the city. It has also increased its day light roadside or suicide attacks since President Hassan took office. Moreover, the city of Mogadishu has no Internet connection because Al-Shabaab disconnected the Internet network from the city and other parts of the country. It seems like Al-Shabaab is micromanaging the city.
Then there’s the corruption allegations: since this president took office two central bank governors had resigned from the office because of corruption, and the government of Somalia did not investigate these cases. Even the president went to say, according to an interview that he gave to the Financial Times, that he doesn’t understand why the donor nations are worried about “this thing” of central bank when corruption allegations became a public knowledge. In fact this has forced Turkey, which used to give the government $4 million every month, to reconsider this direct funding at the end of last year. Probably the president and his advisers underestimated the corruption allegations that they were facing, and thus failed to be proactive and engage public relations to shape the message. In the world of mass media and information war, public perception is the reality regardless if those allegations are unfounded.
Moreover, there’s the name calling. I mean what the diplomats, the spymasters, and opinion makers are saying about President Hassan’s leadership. The director of National Security Agency (NSA) of the U.S. called the president of Somalia “weak” leader not long ago. Remember that the NSA’s director has in his disposal the most sophisticated spy organization in the world to monitor whoever he wishes. The British parliament thinks the president isn’t doing enough, and both Somali opinion makers and non-Somalis think the president is losing the control of his government and his message. If you think I am exaggerating this statement look how far the President went to calm down rumors in the media that said last week that the president was “dead,” after senior government official told the world that the president of Somalia went to Turkey to get a medical check-up and to see his family.
And then there’s everything else: there’s this group that say the president is centralizing all power around his office: “technocrats including enthusiastic diaspora who have returned to help rebuild their country regularly complain that even low-ranking donor officials go over their heads and refuse to deal with anyone but the president, undermining efforts to build the very institutions donors say they want to exist,” wrote the Financial Times; there’s the political infighting; the lack of economic recovery and plan; still using the 4.5 tribe based political system; a huge cabinet; lack of finances; regional political conflicts; floods, droughts, and drones.
These are all substantial allegations and facts that can’t be ignored. In fact, all of these shortcomings have the potential to destruct this president’s government, make him one term president, and one of the worst presidents that Somalia had unless he makes immediate changes that shift instantly and turn around the direction that the country is moving.
These changes should start in the president’s palace. Start firing close advisors that have emotional attachment to the president including public relations people. The president should also fire presidential appointees that head the security apparatus of the country who failed to keep Mogadishu safe and systematically hunt Al-Shabaab. He should ask the prime minister to reduce the 52 ministerial positions to a manageable size focusing more on merit, efficiency and less on tribal demands.
The president should appoint, sincerely, an independent group to investigate corruption allegations, appoint independent central bank governor, and trust the prime minister and his government to do their job by empowering them. He should also cut his abroad travels and focus more on domestic issues such as security, writing the constitution and preparing the country for a national election, minting the Somalia Shilling, and build other governmental institutions.
Most importantly, strong accountability—more public engagement, transparency, proactive governing—and open diplomacy to all nations should accompany these changes. The president should attract people in his inner circle who have diverse views, experiences, educational background, less emotional attachment to his presidency, and care more about moving this country forward. One last thought, it would be imperative the president to act as a referee instead of a player in Somalia politics since he’s the President.
Hassan Mire is a political strategist and writes about Somalia politics, economics, governance and security. He has BA in Economics and Global Studies (politics).
Posted by Siad barre at 10:49 AM