KDF out of Kismayu as Djibouti takes over , KDF will keep one company in Kismayu,KDF military move to retake the insurgent stronghold. baardheer and bu'aale.

Kenya Defence Forces troops have began pulling out of Kismayu and are moving towards the North of the Port city to remove al Shabaab militants occupying some areas. Soldiers from Djibouti and Sierra Leone will now provide security at Kismayu with Nigerian Police unit providing policing services. The move comes after the African Union Mission in Somalia carved out Kismayu into Amisom's sector 5, to be under the command of Sierra 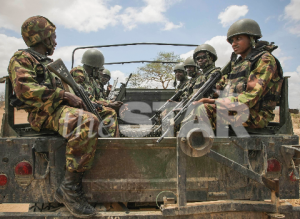 Leone and Djibouti army. KDF will now solely operate in Sector 2 where it is expected to engage the remnants of the al Shabaab militia in Southern Somalia, which are yet to be liberated from the al Qaeda-linked terrorists group. "KDF will, however, keep one company in Kismayu," a senior KDF source said yesterday. In an AMISOM meeting with troop contributing countries held last week, it was resolved that Kenya moves further upward to weed out the insurgents. United Nations Security Council recently resolved to increase the number of troops in Somalia by more than 4,000 from the Ethiopian Defence Forces to take over another sector. - KDF military move to retake the insurgent stronghold. baardheer and bu 'aale. Jubbaland
Posted by Siad barre at 6:16 AM