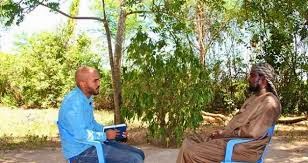 Security officials in Somalia should jail Hamza Mohamed aka Hamza_Africa,AlJazeera staff they knew about the Shabaab Attack on The Villa Somalia .
Mogadishu — Rather than take up arms and join al-Shabaab's fight against Ethiopian troops serving under the African Union Mission in Somalia (AMISOM), residents of several towns in central Somalia are instead fleeing their homes in the dead of night.
Al-Shabaab began increasing its efforts to recruit civilians living in areas it controls on February 10th, after Ethiopian troops announced they were closing in.
Using loudspeakers mounted on vehicles, al-Shabaab told residents of Bulo Burde, El Bur, Galhareri and other towns under its control that it was obligatory for them to join the "war" against Ethiopian troops "invading" Somalia. They said the Ethiopian troops wanted to spread Christianity in Somalia and that it was the duty for every Somali to fight them.
Almost immediately, residents began fleeing their homes to escape forced conscription into al-Shabaab's militia.
Mohamed Abdi, a 40-year-old grocer in El Bur market, said he fled his hometown February 11th and is now in Dhusamareb because he was afraid of being forced to fight in al-Shabaab's war.
"The thing that caused me to flee El Bur district is when nearly a hundred people who were praying the noon prayer at a mosque in El Bur were ordered to listen to a sermon about jihad and how the enemy of God had attacked our country," he told Sabahi. "They told us that it is our Islamic duty to take part in the war and anyone who does not participate will face harsh punishment."
Abdi said he sees no reason to fight alongside al-Shabaab, which the international community recognises as a terrorist group that is against peace.
"This forced me to flee the territories under their rule," he said. "Whenever they feel under siege, they want to convince the people that it is the people who are being attacked, but it seems that idea is not working for al-Shabaab at this time."
'Everyone is running from al-Shabaab'
Hindio Dahir, a 37-year-old mother of five who lives in Bulo Burde in Hiran province, said her husband fled the town at night on February 11th for fear of being killed by al-Shabaab members after he rejected their attempt to recruit him.
"Al-Shabaab's harsh treatment of us has increased and they are threatening to kill anyone who refuses to join them in their war," she told Sabahi. "That is why my husband had to flee the city on foot at night time. I do not know if he is alive or dead, and he told me he was afraid he would be identified as a runaway if he took us all along."
Dahir said she was very worried about taking care of her family with her husband's whereabouts unknown.
"In the past, the children's father was the breadwinner, working in real estate sales," she said. "We lived on the little money he earned, but now al-Shabaab has separated me from my family."
Yahye Jama, 52, who is one of the traditional elders of Galhareri town in Galdadud province, told Sabahi that men of all ages flee the city in secret every night. "Everyone is running away from being forcefully recruited for war by al-Shabaab," he said.
"We know Ethiopian soldiers are heading this way to liberate us from al-Shabaab. Truly, we welcome anyone who is ready to free us from al-Shabaab," he said. "People living here are oppressed by al-Shabaab, which denies them all of their rights."
Jama said al-Shabaab became alarmed when they found out Ethiopian troops were coming to attack them.
"In the district we live in, people feared only al-Shabaab. However, the fear al-Shabaab is feeling is now evident across Galhareri district and the areas that come under it," he said. "[Al-Shabaab is] telling us that all that is left in their struggle is to have people join them. They have no more strength left. I would advise them to make peace instead of getting everyone killed."
Posted by Siad barre at 9:09 PM