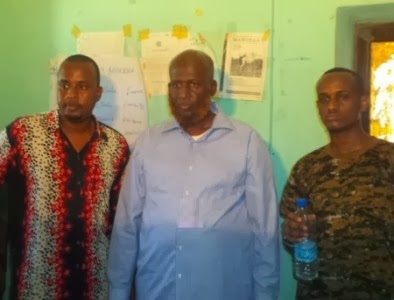 A military court in Puntland has on Tuesday sentenced three men who were found guilty of being linked to the Islamist militant group al-Shabab.
Security forces had arrested the suspects in operations conducted in Bosaso. One of them has been sentenced to life in Prison.
A senior official of the Military Court accused them during the hearing of being  involved in insecurity actions.
‘’ They were sent to destablise the stability of our region and were found guilty of being involved in numerous insecurity actions,’’ said Abdifatah Haji Adan, the court official.
Abdirahman Muse Osman, one of the suspects has been sentenced to life in prison while the other two members were handed  five and ten years  prison. Another suspect named, Aweys was released after not being found guilty to be involved in any terror attack and linked to al-Shabab.
Last year, Puntland executed 13 suspected al-Shabab members including a woman, after the military court found them guilty of orchestrating an assassination of a famous scholar Dr Ahmed Haji Abdirahman. But al-Shabab denied that none of them was part of the group.
Puntland newly elected leader Abdiweli Mohamed Ali vowed to fight against the insecurity that has been rising in the region for the past years.
Posted by Unknown at 1:16 PM