Somalia wants to expel Islamist rebels from strongholds in 2014 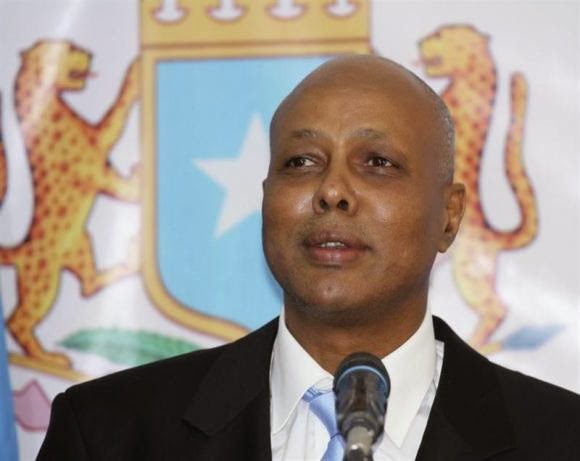 Somalia's new Prime Minister Abdiweli Sheikh Ahmed delivers his speech at the Parliament Building in Mogadishu December 21, 2013.
(Reuters) - A military offensive led by an expanded African peacekeeping force aims to drive Somali Islamist rebels out of their remaining strongholds by the end of 2014, the Somali prime minister said on Wednesday.


Prime Minister Abdiweli Sheikh Ahmed, appointed in December, said al Shabaab rebels who "look like us" would still be able to infiltrate communities but said the goal was to ensure they did not control "distinct areas" of the country as they do now.
Al Shabaab ruled most of the southern region of Somalia from 2006 until 2011 when African forces drove them out of Mogadishu and then expelled them from most urban centres in a nation that has faced war and turmoil for more than two decades.
But the al Qaeda-aligned Islamists, who sought to impose a very strict version of Islamic sharia law, still hold swathes of rural territory in southern Somalia and some smaller towns or villages, including the major coastal stronghold of Barawe.
The United Nations agreed in November to expand the AMISOM peacekeeping force by some 4,500 troops to total about 22,000. The force is expected to launch a broad offensive shortly, with Somali troops fighting alongside it.
The prime minister, speaking at a Nairobi news conference, did not give specifics on territory al Shabaab controlled but said it involved "significant parts" of southern Somalia.
"The plan is that we have al Shabaab out from all these places in 2014. By the end of 2014 we want to see an al Shabaab-free Somalia and no distinct areas controlled by al Shabaab," he said, adding rebels would still likely operate "here and there".
MALL ASSAULT
Even under pressure, al Shabaab has proved it can launch big bomb attacks inside the capital Mogadishu - one last week killed seven people - and the group also carried out a daring assault on a Kenyan shopping mall last year that killed 67 people.
Western nations and Somalia's neighbours worry al Shabaab will continue to exploit areas outside government or AMISOM control to launch further attacks in the region and beyond.
"We understand the challenges," the prime minister said. "They clearly look like us. You cannot separate them from the community. They are not waging conventional (warfare)."
He spoke at a news conference with William Ruto, the deputy president of Kenya, which has troops in the AMISOM force.
Ruto said the additional AMISOM troops highlighted the need to "accelerate the rate at which we bring the remaining parts of Somalia under AMISOM control and eliminate al Shabaab".
Kenya hosts about half a million Somali refugees, and the government is keen to see them return home. Ruto said about 80,000 to 100,000 refugees had already had done so.
The additional 4,500 troops joining AMISOM are from Ethiopia, another neighbouring state which already had a contingent inside Somalia fighting al Shabaab before it agreed to bring them all under the AMISOM command structure.
Analysts expect the new offensive against al Shabaab to start in time to make progress before a rainy season beginning in April hinders movement as dry river beds fill up.
AMISOM spokesman Ali Aden Houmed said an offensive could drive al Shabaab fighters into the dense bush of the Lower Shabelle, a region that includes Barawe and lies between the capital Mogadishu and another main port to the south, Kismayu.