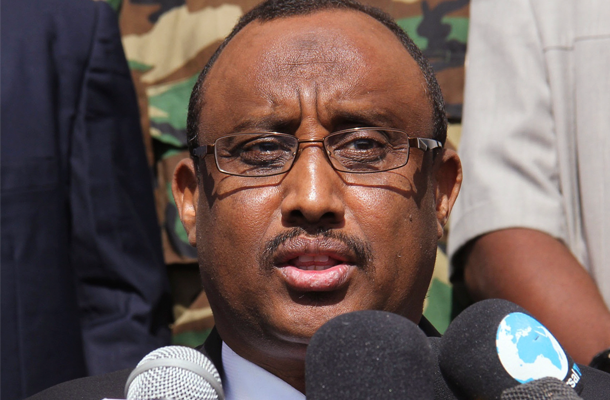 Puntland’s new president, Abdiweli Gas, was a prominent mourner in Mogadishu last week at the graveside of Abdirizak Haji Hussein, a former prime minister of Somalia (1964–67). It was Abdiweli’s first visit to the national capital since his election on 8 January, though he had previously served as a minister (2010-11) and prime minister (2011-2012) in the then Transitional Federal Government of Somalia (TFG). The twitter account of the newly established Somalia Federal Government (SFG) presidency (@theVillaSomalia) hailed the late Abdirizak as a “lion and patriot of Somalia” and highlighted his contribution to “national unity”. The wording will not be lost on Abdiweli Gas. Not only is he of the same lineage and region as the late Abdirizak, but he also now leads the regional state authority that has done the most to promote federalism in Somalia –which, for many Somalis, has dug the grave for national unity.

Abdiweli’s election – by 66 members of parliament selected by councils of clan elders – was peaceful, but he won by the narrowest of margins (33 to 32, with one invalid ballot) and inherits a politically divided and economically weak state. Moreover, as a diaspora politician, originally parachuted into the TFG in Mogadishu, Abdiweli has to prove his commitment to Puntland and beat back any impression that he wants merely to use the Puntland post as a platform to run for Somalia’s presidency. (He already made one failed bid in August 2012.)
The new president’s initial pronouncements have been encouraging, focused on the immediate task of getting Puntland government to work – not least in terms of public financial management, a big concern for donors. He has also made public commitments to restart the democratisation process abandoned – probably with justification – at the eleventh hour by his predecessor, Abdirahman Farole, in July 2012. (See our Dec. 2013 report Puntland’s Punted Polls.)
Further, he has made it clear that he wants to heal divisions within Puntland that have festered for many years. (See our 2009 report The Trouble with Puntland.) In his first speech to parliament on 4 February he said, “Puntland’s unity is paramount and sacred and can only come when all Puntland land comes back to the hands of the government” and called for a Puntland-wide reconciliation conference. Laudable aims indeed (and reflective of previous Crisis Group recommendations), but they should be viewed with some important caveats.
Talk of unity implies the cohesion of the Harti-Darood clan-family, whose local distribution in north-east Somalia is also the basic territorial expression of the Puntland state. Bringing back “all of Puntland to the hands of the government” also means the Harti-Darood-inhabited provinces of Sool, Sanag and Ayn, which the self-declared republic of Somaliland also claims (see map). Since 2004, Somaliland and Puntland armed forces have periodically clashed over these districts; more recently, local militias – associated with the self-declared Khatumo state and based on one sub-clan of the Harti-Darood, the Dhulbahante – have put up resistance to the intrusion of both the Somaliland and Puntland forces. 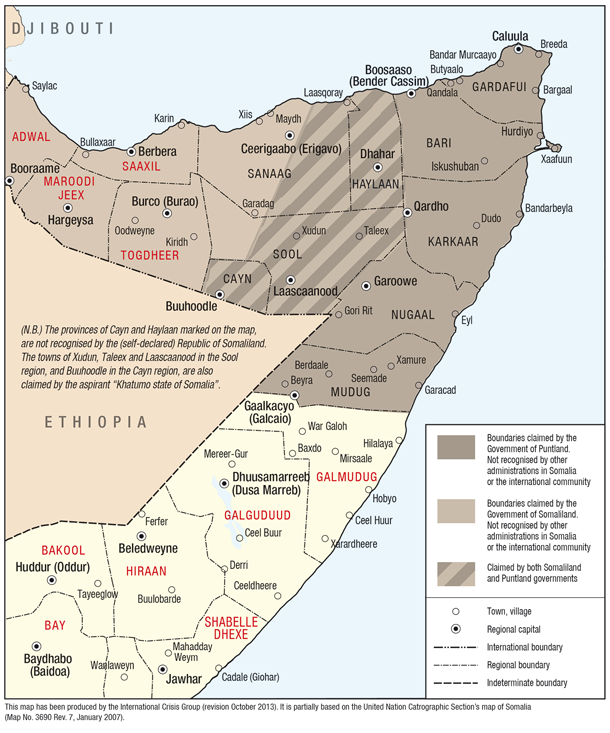 The Dhulbahante clan and Khatumo were critical issues in Puntland’s presidential election; Abdiweli has subsequently appointed two ex-Khatumo leaders as ministers in his new government.
It is certain that Somaliland’s own presidential and parliamentary election, scheduled for 2015, will embroil these same borderlands, both as an all-Somaliland issue and in the competition for clan votes. Concessions for oil exploration in these areas, granted by both Somaliland and Puntland governments (and whose authority to do so the SFG firmly rejects), will only increase the tension.
Welcome though Abdiweli Gas’s peaceful election is, and as sound as his priorities are for his new, 47-member cabinet, his calls for Puntland’s “paramount and sacred” unity need closer attention. In common with all Somalia’s national politicians – including secessionist Somalilanders – he still needs to appeal to his wider clan constituency to gain political momentum. Abdiweli must realise that challenging Somaliland’s territorial claims is no panacea for Puntland’s internal clan divisions, just as Somaliland must acknowledge that it cannot rule its eastern borderlands with an army perceived as an occupying clan. Marginal though the Somaliland-Puntland dispute may seem, it is in precisely these disputed gaps in Somalia’s governance that wider progress can be lost to violence and an extremist group like Al-Shabaab can find its opening
Posted by Unknown at 12:43 PM