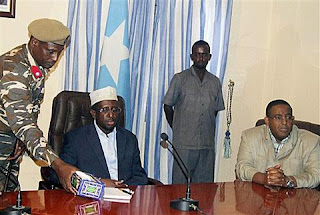 Mogadishu (Agenzia Fides) – "Personal ambitions and rivalries for control of resources donated by the international community are behind the resignation of the Prime Minister," Fides has been told by Bishop Giorgio Bertin, Bishop of Djibouti and Apostolic Administrator of Mogadishu, the capital of Somalia where yesterday, September 21, Prime Minister Omar Abdirashid Sharmarke resigned.
The resignation of the Premier comes after months of tensions among the highest-ranking officials in the country. The tension began in May, when President Ahmed announced that he would appoint a new premier after the National Transitional Government was defeated in Parliament on a vote of confidence. Sharmarke rejected that vote as "unconstitutional." The differences led to the Speaker of the House's divestiture of authority, bringing to light the weaknesses of Government and Parliament recognized by the international community.
"It is a system that is based solely on international aid, but that is not able to meet the real needs of Somalia," said Bishop Bertin. "In my opinion, if the international community were to abandon the leadership and the Somali people to their own devices, there might be a moment of clarification. There would no longer be an excuse for foreign interference and the Somalis would be forced to develop a serious policy to end the profound crisis in Somalia."
"I realize that this is a gamble, because on the one hand, there is the risk of Islamic fundamentalism, which can spread to neighboring countries, and on the other, there is the risk of a war among everyone over control of the real or supposed 'booty'," emphasizes Bishop Bertin. “But at this point, I think that we cannot go on with the Transitional National Government which controls only part of Mogadishu, while the Shabab become increasingly more bold and civilians are caught in the crossfire. The only alternative would be serious international intervention, supported by appropriate means and with a clear strategy to restore order."
We asked Bishop Bertin to paint a picture for us of how the situation would evolve once the National Transitional Government fell: "The Shabab would probably suffer internal divisions as a result of power struggles and scarce economic resources in the country. I would not be surprised if there were clashes between the Shabab and another fundamentalist group, the Hezbollah. The latter appears to be related to various Somali clans, while the Shabab movement seems to be an inter-clan group, a rare reality in Somalia. However, all may be overridden in the end by the people's desire for peace, making them willing to accept the limitations of freedom as long as they find serenity and a system capable of providing a minimum of security and order."
"The situation would be far from ideal, but perhaps it would give the opportunity to start over and gradually improve the conditions of the Somalis, who have been suffering far too long," concludes the Apostolic Administrator of Mogadishu. (L.M.) (Agenzia Fides 22/09/2010)
Posted by Siad barre at 9:43 AM