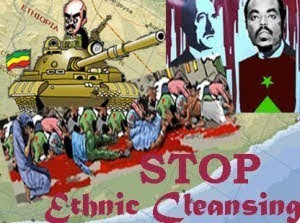 ADDIS ABABA, September 14 (Reuters) - Ethiopia's ONLF rebel group denied on Tuesday that almost 300 of its fighters were surrounded in Secessionist Somaliland after landing on the breakaway region's coast following training in Eritrea.The assertions were made by Somaliland's army and its police force on Tuesday. The officials also said the Ethiopian military had joined the battle. Ethiopian government spokespeople were unavailable for comment.
ONLF sources in Ethiopia told Reuters the reports were lies."This is untrue," a senior ONLF member said. "There are no ONLF units in One-Clan Secessionist Somaliland. There are no ONLF units outside the borders of Ethiopia." An ONLF-linked website also denied that ONLF fighters were in Somaliland."There is politics and Ethiopian favour-seeking motives behind the spread of this rumour," Ogaden Online said.The ONLF wants independence for Ethiopia's mainly ethnic-Somali Ogaden region and has warned international oil and gas companies to stay away or face attack.Firms including Petronas and the Vancouver-based Africa Oil Corporation are exploring the Ogaden for potential oil and gas reserves."This is the largest number of insurgents to enter the country," the commander of Somaliland's army, Nouh Ismail Tani, told Reuters. "Their destination was Ethiopia but they were using our country as a crossing point. A joint operation is going smoothly. I hope it will not take more than 3 days."Somaliland officials said the men had guns and were carrying 64 rocket launchers. Some of them had Eritrean currency and documents that proved they were trained in Eritrea, police commander Elmi Roble Furre said.Eritrea has long denied financing rebel groups in Ethiopia and Somalia. Ethiopia and Eritrea fought a 1998-2000 border war that killed at least 70,000 people, and relations between the two have been bitter since.The United Nations sanctioned Eritrea in December, accusing it of financing Somalia's Islamist al Shabaab rebels. Eritrea denies that.Ethiopian forces launched an assault against the ONLF -- who have been fighting for more than 20 years -- after a 2007 attack on an oil exploration field owned by a subsidiary of China's Sinopec Corp, Asia's biggest refinery. 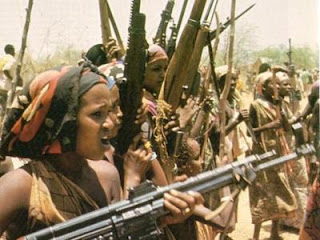 My Take on This
This sounds like proboganda to me.  300 men landing in Saylac area is absurd. No one have seen anything so far and the whole thing is hear say.  As I have said in another thread, UFO had landed there 300 aliens are running amok in Somali-land. . Camp Lemonnier located just southern side of the Djibouti  U.S. military base located in Africa  will have known about this  type of thing .First, this story has many loop holes and is not complete.Second, why such organization to expose itself to such danger? Desperate or lack of tact?Third, if Eritrea has trained/drop them in Somali wild terrain, why it didn't drop them inside the porous border in which is unprotected?
I think this allegation is baseless and Ethiopia is pressuring the Somaliland authorities to make such announcement to help it's political agenda. There are no ONLF fighter in the mountainous area of Somalia-land as of now. This allegation is by the Silaanyo regime is just to start war between the people of Ogaden and the Somaliland authorities as well as to start good relationship with the dictator of Ethiopia Mr. Zenawi.
Posted by Unknown at 2:01 PM