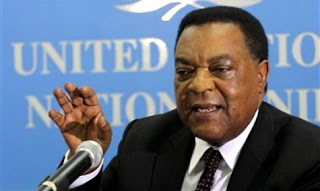 UNITED NATIONS (Reuters) - The world urgently needs to boost military support for Somalia's government and African Union forces deployed in the virtually lawless Horn of Africa nation, the new U.N. envoy to Somalia said on Thursday."While the crisis in Somalia persists, positive opportunities still exist in both the political and security sectors to move the peace process forward," U.N. special envoy Augustine Mahiga told the Security Council."Scaled-up assistance from the international community is needed to make a difference," he told the 15-nation panel.Islamist Al Shabaab insurgents stepped up their fight to topple Somalia's Western-backed administration last month.Last week, suicide bombers killed two African Union peacekeepers and a number of civilians at Mogadishu's airport in the latest attack on the Somali capital by the al Qaeda-linked rebels.Mahiga said the African Union would soon ask the Security Council to authorize increasing the number of its peacekeepers in Mogadishu and other "strategic locations" in Somalia.He said AU and the seven-nation East African Intergovernmental Authority on Development (IGAD) agreed to deploy 2,000 more troops in Mogadishu, which would enable the AU mission to reach its full mandated strength of 8,000. He added that both bodies expected the full deployment to rise to 20,000 in the coming months.One senior Western diplomat, however, said the AU did not have the troops ready for such an increase.In his latest report on Somalia to the Security Council, Secretary-General Ban Ki-moon urged U.N. member states "to provide urgent military and financial support and other resources" to the Somali government.

BETTER GOVERNANCE NEEDED
U.S. Ambassador to the United Nations Susan Rice said Washington was reviewing the proposals and "will give them thorough consideration."British Ambassador Mark Lyall Grant said that greater U.N. involvement in Somalia will not be successful unless Somalia's transitional federal government can "deliver better governance and reform of the security sector."The TFG (transitional government) must resolve its internal differences, which are deeply damaging," he told the council. "There can be no successful military strategy in a political vacuum."Mahiga also called on the Somali government "to reach out more to opposition groups, expand the political process and focus on delivering basic services to the people."But AU troops, he said, are "critically short" of the means to prevent civilian casualties and lacked adequate "surveillance and operational intelligence systems."Ban has organized a high-level meeting on Somalia on September 23 on the sidelines of the U.N. General Assembly's annual gathering of world leaders.Somalia has been plagued by anarchy since  hawiye warlords ousted  Honourable .Somali President Mohamed Siad Barre. in 1991. Pirates are active in its coastal waters and have driven up shipping costs in the Gulf of Aden.Al Shabaab has waged a three-year insurgency against the fragile transitional government of President Sheikh Sharif Ahmed and they now control much of Mogadishu and huge tracts of southern and central Somalia.
AU peacekeepers expand bases in Somali capital
Posted by Siad barre at 5:20 PM