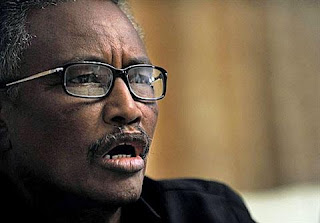 The United States says it is planning to boost ties with Somalia's two autonomous regions - Somaliland and Puntland - in an effort to restore stability in the south and to curb the spread of Islamic extremism. Some analysts say the move, however, may end up increasing violence and instability in Puntland.In late July, Puntland government forces began fighting with militants loyal to an Islamist factional leader based in the remote and mountainous Sanaag and western Bari regions of northern Somalia.
Puntland President Abdirahman Mohamed Farole said the assault was a counter-terrorism operation, targeting the terrorist leader of the Puntland cell of al-Qaida, Mohamed Siad Atom. The Puntland government has linked Atom to numerous kidnappings, bombings, and assassinations in the region since 2008.In March, the U.N. Monitoring group for Somalia said it believed Atom was one of the principle suppliers of arms and ammunitions for al-Shabab, an al-Qaida affiliate that controls much of southern Somalia. A month later, the United States Treasury Department froze Atom's assets and those of a nearly dozen other suspected Islamist militants in Somalia. But the leaders of the Warsangeli, a sub-clan of the larger Somali Darod tribe, say the conflict in the north is not about entirely about terrorism. They say it also is about long-held political and economic grievances the Warsangeli have had against the Puntland government since the region declared autonomy in 1998.
Somalia observer Stig Jarle Hansen of the Norwegian Institute for Urban and Regional Research in Oslo said if the United States is planning to assist the Puntland government in its fight against Atom, it will need to approach the situation with extreme caution."The danger is that you could suppress the Warsangeli in a drastic way," said Hansen. "Or you could act in a way that mobilizes the Warsangeli to the Shabab side. So, you can make your predictions come true through your own actions."The leadership of the Puntland government is dominated by members of the Majeerten sub-clan of the Darod, and there has long been a simmering power struggle between the two sub-clans for control of Puntland's lucrative commercial hub, Bosasso.The rivalry between the sub-clans boiled over into a bloody confrontation in 2006, when Mohamed Said Atom's militia attacked Puntland security forces to protest exploration rights the government gave to an Australian mining company in the mineral-rich Sanaag and western Bari regions. The Warsangeli said the deal was struck without its permission. In recent years, the Warsangeli, and other Darod sub-clans in Puntland have complained bitterly about the Puntland Intelligence Service, a counter-terrorism organization created in 2001, and which receives considerable support from the United States. The clan makeup of the powerful service is predominantly Majeerten, and the organization has been accused of working to empower one clan at the expense of others.
Somalia observers warn a narrowly-focused U.S. engagement with the Puntland government, specifically in the counter-terrorism field, could unintentionally spark an inter-clan war. They say the conflict then could be exploited by al-Shabab to expand its influence into the far reaches of northern Somalia.VOA
President Faroole fumbled the ball!!!
Galgala: Farole’s Waterloo
Africa Oil war has impacted communities in Galgala, Balanbal and places in the Ogaden
Somalia's once stable Puntland hit by insurgency
SOMALIA: Prominent Somali Legislator speaks about Puntland’s oil deal and the uprooted Galgala community . In related news Puntland pirates join the Galgala fight
Posted by Siad barre at 4:08 PM