MOGADISHU (AFP) - After a worrying setback when their Somali government allies deserted their posts, African Union troops in Mogadishu managed to contain the situation, but remain under pressure. 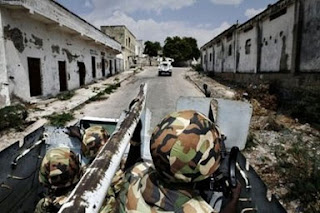 At one point, according to a foreign observer, only the Ugandan AU troops stood their ground to fight off the Al-Qaeda-inspired Shebab rebels, as government forces fled.On August 23, the Shebab announced the launch of a fresh operation "to eliminate the invading Christians and their apostate government."For around 10 days, waves of Shebab fighters attacked African Union (AMISOM) and government positions to cries of "Allahu akbar" (God is greatest).Most of the fighting was concentrated in the seaside capital's northeastern neighbourhoods.The insurgents, who include several seasoned foreign jihadis, advanced on the presidential palace and parliament.At one point, they threatened Maka al-Mukarama, a strategic thoroughfare linking the harbour to the airport and AMISOM's main lifeline."For 48 hours, there was a very alarming period of swaying," said a foreign Mogadishu-based official. "It was a complete fiasco for the TFG (transitional federal government)".Soldiers, militiamen and to a lesser degree moderate Sufi allied forces -- all deployed along different segments of the front line -- "abandoned most of their positions," the official said.Under Shebab pressure, some vacated their positions without a fight, while others retreated frantically when they ran out of ammunition."At one point, only the Ugandans (the main contingent in AMISOM) were fighting," the foreign observer said."Fighting has escalated since August 24. This was characterised by TFG forces withdrawing from their positions," admitted Colonel Mickael Ondoga, who commands the Ugandan force."When they ran, they exposed us and made our positions more vulnerable, we had to move to take tactical advantage," he added.Ondoga explained that AMISOM deployed tanks and other armoured vehicles -- the kind of equipment the Shebab lack -- and punched back."The TFG withdrew from a dozen positions... Most of these positions have been reoccupied (by AMISOM) and now the government forces have started coming back to these positions," he said.After a week's lull in the fighting, it emerged clearly that the Shebab had failed to reach their military objectives of capturing the presidential compound and cutting Maka al-Mukarama.
Shebab fighters have nevertheless moved closer, and are now just a couple of blocks from the avenue, presenting a serious threat to the crucial supply line that cuts right through the middle of the city, and forcing AMISOM to set up two new positions there."The Mujahedeen fighters won the war to eliminate the Christian aggressors (...)", claimed Shebab leader Abu-Zubeyr "Godane" in a statement."This offensive was a failure," AMISOM spokesman Ba-Hoku Barigye claimed for his part. "The enemy was not able to chase us from a single of our positions and on the contrary, we have advanced in the city," he said.
But according to a local journalist, AU forces made scant gains, only taking over some front-line positions previously held by their Somali government allies.Another Mogadishu-based expert argued that the insurgents' thwarted offensive could prompt some Shebab leaders to advocate a new strategy of spectacular operations against high-value targets rather than territorial warfare."It was a bloodbath... The meagre results they derived from this offensive is causing some tension within the Shebab military leadership," the analyst said.
The TFG forces' disorderly retreat last month however confirmed that President Sharif Sheikh Ahmed's government is on its last legs, unlikely to breed a force able to take over security duties from AMISOM.
"We are riding a dead horse," was the uncompromising assessment made by one of AMISOM's political officials. 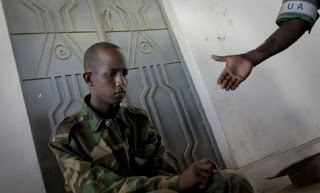 give himself up to AMISOM
shabaab
Posted by Unknown at 10:12 AM