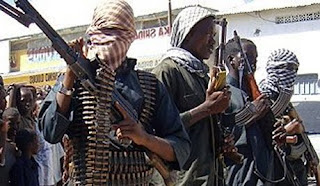 Somali pirates have found a new method of safely committing dastardly crimes at sea and getting away scot-free. They have as a weapon of blackmail a large tanker carrying 300 thousand tons of crude oil, which they threaten to blow up if they are in danger of being captured. Ecologists are in panic. The spilling of 300 thousand tons of crude into the sea will cause a global ecological disaster, the consequences of which are difficult to predict, said Alexei Knizhnikov of the World Wild Nature Fund. "The blowing up of the tanker and the spilling of its content into the sea bodes evil for the entire world, especially if it happens close to the coast. Such an incident could be similar to the one in the Gulf of Mexico , caused by the explosion on the BP oil platform. Three years ago, a tanker poured 4 thousand tons of crude oil-almost one hundred fold less than the amount of oil on the tanker seized by the Somali pirates, into the gulf of Kerch. Thousands of birds perished in that incident; if the Somali hoodlums carry out their threat, the fallout would be horrendous," declared Knizhnikov.The pirates seized the Sambo Dream ship in April , en route from Iraq to the US with its cargo of crude oil. The protracted negotiations between the owner of the tanker and the cargo and the pirates failed to produce results; the pirates wanted a ransom of 20 million dollars, but nobody was prepared to give the bandits such an amount of money, even though the oil the tanker is carrying is worth 70 million dollars and the vessel itself 60 millions. The “Sambo Dream” is the 3rd tanker seized by the pirates, and ransoms were paid for the first two in 2008 and 2009, when the pirates were not as greedy as they are now. Neither the International Court nor UN resolutions have frightened the pirates, meaning that more drastic measures are needed to deal with the Somali pirates, said Alexander Gurov, a member of the Russian State Duma’s security committee."In the middle ages, the scourge of piracy was rampant, but when a real war was declared against pirates, the evil of piracy disappeared. Pirates were surrounded at sea and eliminated; they were liquidated on the Islands, where they camped out. Piracy is once more upon the world. It is obvious that in addition to the agreements reached between the countries in the world, there is a need to thrash out a legal basis to permit the treatment of pirates like ordinary terrorists," suggests Gurov. "Fast moving war ships should hunt down pirates and liquidate them. Another effective method of dealing with the problem, which has a potentially huge economic advantage, is to help countries from which pirates come to take care ot citizens so as to discourage them from joining the ranks of the pirates," Gurov advises.
Meanwhile, war ships shadowing the seized Sambo Dream at a safe distance are not planning a storming. The pirates’ blackmail strategy is working.Source: Voice of Russia