Emerging Africa: How 17 Countries Are Leading the Way 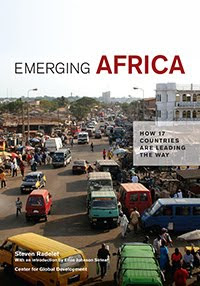 “Steve tosses out the stereotypes and unearths reality. . . . A meticulous and fascinating account of sub-Saharan Africa’s most successful economies.”

—Bono, lead singer of U2 and co-founder of ONE and (RED)
“Steve Radelet’s comprehensive analysis provides further grounds for optimism that improved macroeconomic management . . . is producing tangible results . . . while being realistic about the effort needed to tackle remaining challenges.”
—Antoinette Monsio Sayeh, former Minister of Finance of Liberia and Director, African Department, International Monetary Fund
“Africa is too often used as a blunt weapon to score points in debates about hopeless poverty or desperate need. Radelet uncovers the national success stories that are lost in 'the Africa debate.' He has done Africa and the citizens of these good performers a great favor.”

—Lord Mark Malloch-Brown, Monitor Group, former Minister of State, United Kingdom
"Africa is in flux. Many countries have learned from past mistakes and now face huge new opportunities. Yet much of this has gone unnoticed. Radelet’s important book will open your eyes to the new realities.”

—Paul Collier, Oxford University, author of The Bottom Billion
Since 1995, seventeen African countries have defied expectations and launched a remarkable, if little-noticed, turnaround. These countries are putting behind them the conflict, stagnation, and dictatorships of the past and replacing them with steady economic growth, deepening democracy, improved governance, and decreased poverty. Five fundamental changes are at work: (1) more democratic and accountable governments; (2) more sensible economic policies; (3) the end of the debt crisis and changing relationships with donors; (4) the spread of new technologies; and (5) the emergence of a new generation of policymakers, activists, and business leaders.
Emerging Africa: How 17 Countries Are Leading the Way takes a fresh approach by recognizing the important differences between Africa’s emerging countries, the oil-exporters (where progress has been uneven and volatile), and the others (where there has been little progress) instead of treating sub-Saharan Africa as a monolithic entity. This important book describes the revitalization underway in the emerging countries and why it is likely to continue.


Africa: States of independence - the scramble for Africa