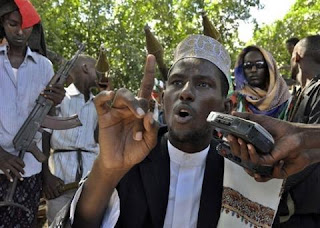 A Sufi militia defending parts of Somalia's central regions from al-Qaida-linked militants says it believes al-Shabab has shifted some of the group's military focus from Mogadishu to the central regions and is preparing to launch attacks in the central Galgadud region.Fighters for the Sufi Ahlu-Sunna Wal-Jama'a militia are said to be on high alert in Ahlu-Sunna strongholds, including Dhusamareb, Guri-el, Abudwaq and Balanbal in the Galgadud region.Earlier this week, a spokesman for the Sufi group, Abdullahi Abdirahman al-Qadi urged residents in towns under its control to remain vigilant and to report any al-Shabab presence or activity.
Stability
Horn of Africa observer Stig Jarle Hansen at the Norwegian Institute for Urban and Regional Research says if al-Shabab attacks and is able to capture Dhusamareb, it could significantly affect the stability of Somalia's semi-autonomous Puntland region as well.The Puntland government is battling an Islamist insurgency in the remote mountains of northern Somalia, led by factional leader, Mohamed Siad Atom, who has pledged allegiance to al-Shabab and is believed to have links with al-Qaida,Analyst Hansen says the fear is that if Ahlu-Sunna is chased out of Dhusamareb, al-Shabab may be able to advance to the Puntland-controlled area of Galkayo and link up with Atom's forces."The wider picture is that al-Shabab has been slowly but surely expanding north into Galgadud province," said Hansen. "In fact, the last stronghold of the Sufists before you reach Galkayo is Dhusamareb. If Dhusamareb falls to al-Shabab, that might change the whole strategic situation."
Buffer
Although Ahlu-Sunna suffers from internal divisions, it has served a vital role as a buffer force against al-Shabab ambitions to seize all regions in southern and central Somalia.Ahlu-Sunna's heightened concern in Galgadud follows a major offensive launched by al-Shabab in the Somali capital Mogadishu during the Islamic holy month of Ramadan. Al-Shabab, which aims to turn Somalia and other parts of the region into an ultra-conservative Islamic caliphate, carried out two separate suicide attacks in the city and, following fierce battles, took over several government bases. But it failed in its larger objective to take the presidential palace and other key sites that remain under A.U. and government control.
Unable to seize all of Mogadishu, observers say there is a possibility that al-Shabab could be shifting its strategy and looking once again to target Galgadud's largest town, Dhusamareb.In January, al-Shabab forces briefly seized Dhusamareb from Ahlu-Sunna Wal-Jama'a in what analysts described was part of a move to encircle the government in Mogadishu by extending its authority throughout central Somalia. Ahlu-Sunna fought back several days later and regained control of Dhusamareb. It has controlled the town ever since.Ahlu-Sunna's reputation in Somalia has been tainted by reports that it is supported by Somalia's regional rival, Ethiopia.Alisha Ryu