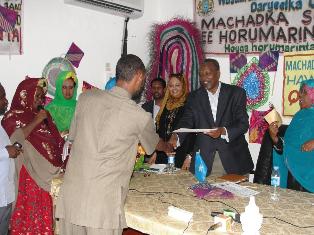 (Mogadishu, 30 September 2010): The Caretaker Prime Minister, Hon. Abdiwahid Elmi Gonjeh and Minister of Women and Child Development, Hon. Fowzia Mohamed Sheik attended this morning a ceremony to honor a new batch of graduates from Qamar Memorial Institute for Women Development. The Institute is run by the Ministry of Women Development and Family Care.Certificates were awarded to 37 students who have completed four-month computer literacy and six-month business administration programs; 35 of them were female. The program will open a door of opportunity for these girls who may serve as office managers where they can be role models for other girls.The Institute is free of charge as most of these students are from financially challenged families. They are either orphans or from camps of the Internally Displaced People in Mogadishu. Hon. Fowzia said:"We had no idea what a great impact this program would have on the life of these students. But we have noted they are in position to earn their livelihood decently. I believe education is the best means to empower women.“It is our responsibility to make sure girls get free and quality education, which is such a heavy task. But we will do what we can despite limited resources.”The Caretaker Prime Minister said:“I would like to express my appreciation for the great work by the Ministry of Women Development and Family Care. I see your work can make a great difference and allow us to empower women who can change the lives of their families and giving them dignity, hope and opportunity.I hope the young nationals integrate successfully into the public and private sectors and I am pleased to be part of the graduation ceremony of one of the very first batches."
About the Institute
Qamar Memorial Institute for Women Development was established on 10th December 2009, just 8 days after when a suicide bomber killed 4 ministers including Qamar Adan, late Minister of Health, among other nationals. The number of students in the Institute is 401, of which 92% is female. The courses offered by the Institute are: business administration, computer literacy, arts, and home economics.As the Institute celebrates its first year in December this year, the gradation is a testimony of achievements and is demonstrating its ability as a major contributor to the progress of women in Somalia.
END Ministry of Information, Mogadishu
Posted by Unknown at 4:38 PM