Somali President Addressed the Session of the Parliament 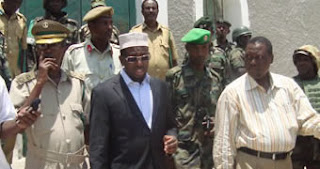 Mogadishu, Somalia (tf.sf ) Somali President Sharif Sheikh Ahmed addressed a session of the Somali Parliament on Wednesday. In a wide ranging speech, the President urged MPs to herald a change in the government as it moves to tackle key challenges.The president began his address by paying tribute to the fallen MPs and the injured, as he also saluted the Parliamentarians for their fortitude in this trying time.The President informed the Parliament that the collective responsibilities the leaders and TFG institutions share, necessitates timely gathering and serious consultations and reflection. The President said that “there has been number of reshuffles to improve the political and security situation and to reinvigorate the government, but the security situation has gotten worse.”On the controversial proposed constitution, the President also informed the Parliament that half of the Independent Federal Constitutional Committee were not approved by the Parliament and without this whatever they are working on will not be legal unless and until they are approved by the Parliament. “It is my responsibility to uphold the law. We need the drafting process to go through the proper legal channels.” The President added. Emphasising the need to get the constitution making process right, the President said, “Constitution it is the most important document fashioned for a nation; it is what shapes their destiny, it reflects their history and it is the foundation of their government … the constitution embodies the soul of the Somali people …we cannot play fast and loose with this … we will support its making provided it is done properly.”Speaking of the transitional tasks and the end of the TFG mandate the President said, “We should not be preoccupied with what we will be doing after 2011; we should be occupied with what we should be doing before 2011. We have security problem and that is our foremost priority.”“What's left of the transitional period is short and long, if we produce tangible results, we have lots of time but if we fail to produce we won’t have much time. Let us aim and intensify our efforts to produce results; that we can.” The President remarked.Speaking of the alleged infighting among TFG leadership, the President said,“There is not infighting among Somali leaders. There is no conflict between myself and the PM or myself and the Speaker and there is no problem between myself and the Chief Justice.”“You elected me to discharge duties and among my duties are appointing a Prime Minister who shall form a government and I am responsible for his supervision. If he falls short of our expectations, it is my duty to come back to you and inform you this is not working and I should ask you where shall we go from here, because I cannot be salient on the squandering of the future of Somalia…Reform is possible. Let us march forth for positive change…” The President said.
Three hundred-plus MPs attended the session.
Contact: media@presidency.gov.so
Posted by Siad barre at 3:30 PM