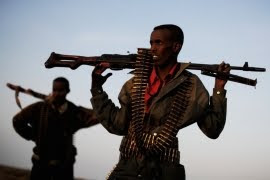 Armed Somali men provide security to the local government of Galkayo, a town known to be a center for piracy along the East African coast of the Indian Ocean. (Roberto Schmidt/AFP/Getty Images)
GlobalPost NAIROBI, Kenya — It was already light by 5 a.m. when two squads of U.S. Marines launched a daring raid on a container ship occupied by pirates off the coast of Somalia.The 8,000-ton MV Magellan Star, a German-owned vessel, had been boarded by Somali pirates last Wednesday but they did not control it. The Magellan Star's 11-man crew signaled for help and disabled the engine before locking themselves in a safe room.Jurgen Salamon, managing director of Dr. Peters Group, the ship's owners, said that he had received an angry phone call from the pirates when they found the ship disabled and, apparently, abandoned.
“The pirates were told the crew was on holiday,” said Salamon.
A day later the U.S. Marines boarded the Magellan Star. Last year, Navy SEAL snipers fired from aboard a warship and killed three armed men to release Richard Phillips, captain of the U.S.-flagged Maersk Alabama, but last week was the first time U.S. Marines actually set foot aboard a captured vessel.
Two groups of a dozen soldiers each from the 15th Marine Expeditionary Unit left the USS Dubuque, an amphibious warship deployed as part of the Combined Task Force-151 anti-piracy flotilla, aboard inflatable speedboats mounted with heavy machine guns.Watched over by a pair of helicopters and a team of snipers aboard the USS Dubuque, the Marines extended portable ladders to climb aboard the Magellan Star. They then did a sweep of the vessel, rounding up nine suspects without firing a single shot. The entire operation took only an hour.“It was a combination of speed and overwhelming force. At that point I think they realized that resistance was futile,” said Lt. Col. Joseph Clearfield in a conference call to reporters.Although other suspected Somali pirates have been charged in U.S. courts and convicted by judges in Kenya and the Seychelles, it is still unclear what will happen to the group aprehended aboard the Magellan Star.The marine raid was a rare moment of victory in the ongoing battle against piracy.The summer lull in attacks had less to do with beefed-up naval patrols than bad weather. When the monsoons blow the Indian Ocean seas get rough, making piracy — carried out in fast low-sided skiffs with outboard motors — a much more dangerous business.The multimillion-dollar ransoms also mean that pirate gangs have plenty of cash to reinvest in faster engines and better communications equipment and positioning devices, as well as guns.


Now that East Africa's monsoon season is over, Somalia’s pirates are once again taking to the seas and international naval patrols are preparing for another onslaught of attacks.Observers say the lure of quick money has contributed to a rise in the number of attacks, which almost doubled between 2008 and 2009.
Posted by Unknown at 4:51 PM