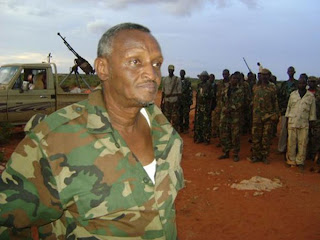 Armed with assault rifles and machine guns mounted on pickup trucks, the Horn of Africa's latest liberation group began fighting this summer in the semidesert formerly known as British Somaliland. They call themselves the SSC and their deputy leader is a sturdy, gray-haired former army officer named Colonel Ali Hassan Sabarey, who speaks English and studied business administration at college.
He is also a Canadian. "I really miss the hockey," the former Toronto resident told the National Post in a phone interview. "I really miss that and I miss a lot of things. I miss the Eaton's Centre, I miss the downtown, I miss the community and I hope I will be back." In the four months since Col. Sabarey, a former Seneca College student, and the SSC leader Suleiman Essa of Columbus, Ohio, arrived in the region, their militias have clashed repeatedly with Somaliland government forces. "A number of people have lost their lives," said Mohammed Omar, below, the Foreign Minister of Somaliland. He said the SSC was trying to undermine security in Somaliland and neighbouring Puntland and Ethiopia. "It is very unfortunate to know that some of the people who are causing harm to our security, or attempting to endanger our security, are actually coming from the United States or from Canada," the Foreign Minister said. "I would describe those leaders who are waging war against Somaliland, we call them people who have committed war crimes. They simply attacked and killed citizens, therefore we would like to take them into justice in Somaliland." The SSC, which derives its name from the Sool, Sanaag and Cayn regions it represents, is a product of the almost total collapse of Somalia, one of the most lawless, chaotic and heavily armed places on the planet.
Somalia is also one of Canada's top sources of refugees. About 150,000 ethnic Somalis live in Canada, according to government figures. But some have returned to take up leadership positions in their troubled homeland. Abdirashid Ali Sharmarke of Ottawa served as prime minister of Somalia's fragile UN-backed Transitional Federal Government until he resigned on Tuesday. A handful of young Toronto men has also joined Somalia's version of the Taliban, Al-Shabab. And there is Col. Sabarey. "He's a very easy-going, humble kind of guy," said Abdi Saleban of Ottawa, who attended a conference in Nairobi last year that founded the SSC and made Col. Sabarey its deputy leader. "He has a military background." The colonel comes from Las Anod, in northern Somalia, his associates said. He served in the Somali National Army during the Siad Barre. He left the country in 1990 to study in the United States and came to Canada in 1991, he said. That same year, northern Somalia broke away from the south. The Somali National Movement, formed by exiles in London, declared independence from southern Somalia. It called the new northern republic Somaliland. Roughly the size of England, Somaliland borders Somalia's Puntland region, Ethiopia, Djibouti and the strategic Gulf of Aden. With its capital in Hargeisa, it has a population of 3.5 million and an economy largely based on livestock exports to Saudi Arabia. Relative to the turmoil in southern Somalia, it is peaceful.
"Somaliland is actually a flourishing democracy," Foreign Minister Omar said. "We have just had a presidential election which has been declared a free and fair election by the international community. We also have a thriving society, including the economy."  nationalpost.com/
Ex-somali army soldier. with  newly-trained TFG troops from Northern Somali Unionist  from northern Somalia. aka SSC