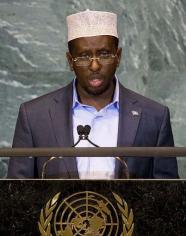 UNITED NATIONS — The presiden of Somalia's weakened transitional government on Saturday accused Islamist insurgents of seeking to turn the war-stricken country into a base for Al-Qaeda to bring terror to the whole of the Horn of Africa.Sharif Sheikh Ahmed, whose western-backed administration only retains a shaky control of Mogadishu with African Union peacekeepers, appealed for greater international support including more troops to fight Islamists."Somalia is a weak link" in the fight against international terrorism, the president of the transitional federal government told the UN General Assembly.Sharif told world leaders that Al-Qaeda was working with the Shebab militants who now control much of central and southern Somalia, which has been at conflict for more than two decades.The president said the activities of Shebab "turns the stomach of anyone with a conscience.""They are killing Somali citizens, cutting their throats, cutting off their limbs and they have carried out horrible crimes against humanity such as cutting off the heads of their victims and throwing them away," he told the assembly."This movement does not believe in Somalia as a country and does not believe in the creation of a government in Somalia but wants to turn the whole of the Horn of Africa into a terrorist hub for their Al-Qaeda handlers to wreak havoc in the region and beyond."UN officials say growing numbers of foreign fighters are entering Somalia to join Shebab, and in many cases are leading insurgent attacks against African Union troops.But the international community has been increasingly critical of Sharif's efforts to establish a stable government.The transitional government has a mandate until August 2011, but international officials say authorities are failing to effectively bring opposition groups into government and even to organize basic services.Sharif said his government needed more global resources, more support for the African Union military mission (AMISOM) and more international security forces.The United Nations held a special meeting on Somalia on Thursday and a statement called on the transitional government to overcome divisions and speedily make arrangements for an administration to take its place.