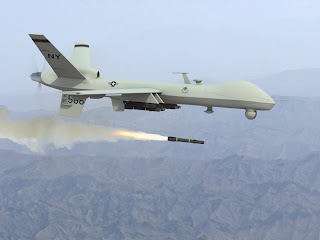 A sharply escalated campaign of CIA drone strikes in Pakistan is aimed in part at al-Qaeda units suspected of planning terrorist attacks on targets in Europe, a threat that U.S. officials described as "credible but not specific" enough to allow authorities to anticipate precisely where or when a strike might occur
The intensified bombing of targets in North and South Waziristan represents an expansion of the secret drone program from its origins as a weapon used in a selective hunt for high-ranking operatives to one now delivering a barrage of strikes in the hopes of disrupting a still-murky plot.
A U.S. official said that President Obama and congressional leaders have been briefed extensively on the European threat in recent weeks and that the warnings are considered ominous enough to warrant preemptive strikes.
American intelligence agencies have had "to work backwards, with your starting point being individuals you believe are involved in plotting, even when you don't have the full outlines of the plot itself," the U.S. official said. "That's why we have been striking - with precision - people and facilities that are part of these conspiracies."
U.S. officials said that intelligence about potential pending attacks has not indicated that the plots are aimed at targets in the United States. Still, officials alluded to significant security precautions.

A senior administration official said that the president "has held multiple sessions with his CT [counterterrorism] and homeland teams in recent weeks to review this and other threat reporting and to make sure that all appropriate steps were being taken to protect the American people."
The flurry of drone strikes continued Tuesday amid reports of a new attack by pilotless Predator or Reaper aircraft on a Taliban compound near Wana in South Waziristan. If confirmed, it would bring the total number of drone attacks in September to 21, far outstripping the previous monthly record of 12 strikes, reached in January, according to numbers compiled by the Web site Long War Journal.
Several U.S. officials interviewed would not speak publicly about the campaign, or the intelligence behind the fears over a European terror plot. Director of National Intelligence James R. Clapper Jr. said in a statement Tuesday: "We know al-Qaeda wants to attack Europe and the United States. We continue to work closely with our European allies on the threat from international terrorism, including al-Qaeda."
The U.S. has shared intelligence with European allies in recent days, Clapper said, and is working with "our key partners in order to disrupt terrorist plotting, identify and take action against potential operatives, and strengthen our defenses against potential threats."
The link between the stepped-up campaign of drone strikes and the potential European attacks was first reported by the Wall Street Journal. U.S. officials said, however, that there are multiple factors behind the escalated campaign, including expanded latitude from the Obama administration to punish a militant network that has carried out attacks in Afghanistan and is believed to be sheltering al-Qaeda.
The Haqqani network has long been considered by U.S. officials to be a proxy force for Pakistan's powerful Inter-Services Intelligence directorate. The United States has prodded Pakistan to confront the group, to little avail.
"There is a recognition that the Pakistanis can't do anything there and won't," a second U.S. official said. As a result, the official said, U.S. forces and the CIA have been given "a green light to go after Haqqani."
A senior U.S. counterterrorism official said "there has been a lot of noise in the system" pointing to an al-Qaeda plot against targets in European countries including France, Germany and Britain.
Mounting anxiety has prompted European authorities to take a series of precautionary steps in recent days, including the evacuation on Tuesday of the Eiffel Tower in Paris for the second time in as many weeks.
ABC News reported that information about the European plot had been based to a large extent on the interrogation of a suspected German terrorist now being held in U.S. custody at Bagram air base in Afghanistan.
U.S. officials confirmed that there is a detainee at Bagram who had been captured in that country and holds a German passport, but they played down any connection between the prisoner and the stepped-up drone campaign. Washington Post