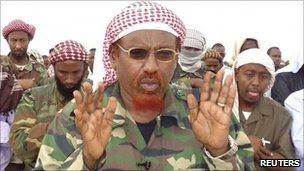 He steals privately owned property and says it needs to serve Islam  should  his hand  get cut off ??

Hassan Dahir Aweys admits his group have taken over the media network
Somali militants who have seized a radio and TV station say it will now broadcast only Islamic messages.
Hassan Dahir Aweys, who leads the Hizbul Islam group, said he wanted the broadcasts to serve Islam.
The seized station, GBC, was popular because it used to show live international football matches.
Another broadcaster, Horn Afrik, was also attacked on the weekend. Witnesses blamed the al-Shabab militant group, but they denied the raid.Both al-Shabab and Hizbul Islam are trying to topple the transitional government, and have frequently targeted the media by killing journalists and banning music from the airwaves.
According to witnesses, the first attack was on Horn Afrik, one of the country's best known independent broadcasters.Late on Saturday, gunmen thought to be from al-Shabab raided the network's headquarters in Mogadishu.One eyewitness said the station's security guards were blindfolded and beaten by the gunmen, who then moved through the building seizing radio equipment.The group later denied the attack, but analysts say Horn Afrik's offices are in an area which is under al-Shabab's control.A few hours later, GBC was stormed by fighters from Hizbul Islam.GBC workers had apparently earlier refused to hand over the station to the insurgents, so gunmen forced their way into the building, chasing away the staff.The BBC's East Africa correspondent Will Ross says radio stations provide a vital source of information for Mogadishu residents, who need to be constantly updated on which areas are unsafe.But in the face of ongoing attacks, it is virtually impossible for the stations to carry out their work, our correspondent says.Last year nine journalists were killed in Somalia - the highest total in any one year since 1991, when armed conflict broke out following the collapse of the government of the former President Siad Barre.Al-Shabab and Hizbul Islam between them control much of south and central Somalia.The government, backed by a 6,000-strong African Union force, controls only small parts of the capital .BBC
it's not the first time.. Here's a little bit of background 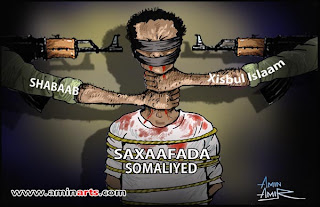