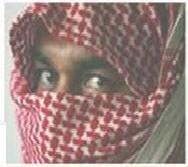 DOJ press release
CHICAGO — A US man arrested hours before he was scheduled to travel to Somalia to fight with a terrorist group against "infidels" has been indicted on two terror charges, officials said Thursday.
Shaker Masri, 27, had allegedly been "espousing increasingly violent views to an individual he befriended in early 2009, and later began to openly express a desire to participate in a 'jihad' and to fight against what he characterized as 'infidels,'" the Justice Department said.
Masi, who was born in Alabama and now lives in Chicago, allegedly "hoped to join the specially designated terrorist group Al-Shebab and commit a suicide attack targeting 'infidels,'" the Justice Department said.
Masi, who has been held without bail since his August arrest, was indicted by a grand jury on the charge of attempting to provide material support to the Al-Qaeda-linked group.
He was also indicted on the charge of trying to provide material support, and cover it up, to someone attempting or conspiring to use a weapon of mass destruction outside the United States.
At least two dozen Americans have gone to Somalia to fight in its civil war in recent years, FBI Director Robert Muller said last week.
Scores more like Masi have been arrested in the United States for attempting to participate in or support the two-decade long civil war which has virtually brought Somalia to its knees.
Some 7,200 troops in a poorly equipped African Union mission (AMISOM) are all that stops Shebab taking over the Somali capital.
The United Nations warned earlier this month that Shebab insurgents are a serious international security threat and made a new appeal for the nation's transitional government to end its squabbling.
Posted by Unknown at 3:53 PM