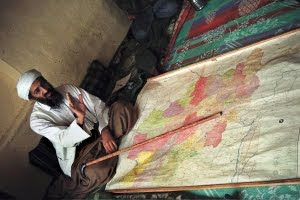 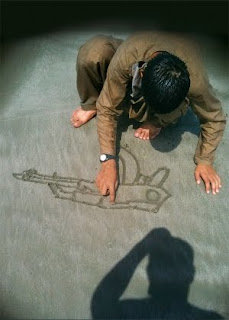 Nine years after 9/11, Osama bin Laden’s network remains a shadowy, little-understood enemy. The truth, as revealed by one of its fighters, is both more and less troubling than we think.
The incident didn’t get much international attention at the time: just another Predator strike on suspected jihadis in the mountains of North Waziristan. This one took place on March 16 at a compound near the town of Datta Khel. Several news services ran items, although they differed on almost every important detail.
Hafiz Hanif saw it happen. The young Afghan and other members of his Al Qaeda unit were passing through the area in two cars when they made a stop outside a big walled compound, and Hanif was sent to fetch some supplies that had been left there a few days earlier. He knocked at the front door and then politely turned away, toward the cars. In Pashtun country it’s considered rude to wait facing someone’s door, in case it happens to be answered by a woman. But as Hanif’s gaze passed over the cars, one of them exploded. Moments later the other blew up. The roaring blasts from the American Hellfire missiles knocked him down. When the dust cleared, there was only a tangled mess of smoking metal where the cars had been. Seven Al Qaeda Arabs, including a ranking Syrian and an Egyptian, had been killed instantly. But Hanif found a badly injured fighter and tried to help him. “He had serious head and chest injuries,” Hanif tells NEWSWEEK. “He died in my lap.”
Hanif (the name he asks us to use) is staying with his parents at their home near Karachi for now, and they’re doing their best to keep him there. He’s only 16, and they never approved of his running off to join the jihad. He’s a bright student, good at math and fluent in English and Arabic as well as Urdu and Pashto. Yet he also spent much of the past 18 months training and working with Al Qaeda in Pakistan’s tribal areas and across the border in Afghanistan. We have checked out his account as far as it could be confirmed, and his uncle, a senior Taliban official who backs up the boy’s story, has been a reliable source to Newsweek in the past. After Hanif disappeared in February 2009, the uncle and the boy’s father traveled twice to Waziristan in search of him. The father finally found him on the second trip, after two months of looking, but the boy would not leave his Arab friends until months later, when his mother’s desperate pleading finally prevailed.


A Eureka Moment in the Middle of a Nightmare

Last week President Obama announced the end of the U.S. combat mission in Iraq. Yet nine years after 9/11, America still has 100,000 troops in Afghanistan. And while their mission is ostensibly to disrupt and dismantle Al Qaeda, most Americans still have only a fuzzy conception of who the enemy is. Osama bin Laden has become barely a shadow, with a March 2010 audiotape as the most recent evidence that he’s still alive. According to CIA figures his terror network has perhaps 100 or fewer fighters in Afghanistan, but of course that’s merely guesswork. The real war against Al Qaeda is being waged by Predator drones in Pakistan’s tribal areas, and its details emerge slowly and in tiny increments.

What hasn’t been available until now is a detailed, insider’s view of what Al Qaeda looks like today. Hanif’s account provides that view. In some ways the picture is what you might imagine—of fighters on the run, hunted by drones, diminished in numbers. Yet Al Qaeda’s allure remains intense: Hanif chose to join bin Laden’s army rather than his uncle’s Afghan Taliban because of the group’s still-elite status among jihadis. While he’s seen many of his associates killed, he’s also seen them replaced by a constant stream of recruits from the Middle East and elsewhere. And he’s seen how even the tiny number of Qaeda operatives can act as a force multiplier, making other groups more deadly in their war against America. In fact, Hanif claims to have had a small role in one of the CIA’s greatest tragedies: last December’s suicide bombing at Forward Operating Base Chapman in Afghanistan that killed seven operatives.
It has all seemed like a grand adventure to the boy, who appears blissfully oblivious to the brutality and cruelty of the jihadis: the ruthless murders of suspected spies, the acid attacks on girls, the reign of terror in areas they control. The tale as Hanif tells it is deceptively simple. But it makes clear that the challenge Al Qaeda represents remains devilishly complex.

Ever since he can remember, Hanif had dreamed of joining the jihad. He was just 7 when America invaded Afghanistan, and Taliban fighters, officials, and supporters soon became regular visitors at his family’s home near Karachi. The boy grew up steeped in stories of the holy war against the Soviets; of Mullah Mohammed Omar’s fight to overthrow corrupt Afghan warlords; of the Taliban’s years in power; of the regime’s overthrow by American bombs; and of the thriving anti-American insurgency to restore Omar’s Islamic Emirate of Afghanistan. “The aim of my life has always been to be a shahid,” he says—a martyr. “I want to attack infidels who insult Muslim women, who occupy Palestine, Iraq, and Afghanistan. There is nothing more to be strived for in this life except joining the jihad and becoming a shahid.”One day early last year, he met a gray-bearded tribesman at a café in Karachi. The man told thrilling tales of the Pakistani Taliban’s war against government security forces in the tribal areas. Hanif, who had just turned 15, hung on every word. “He came back to meet me the next day,” the boy recalls. “Carefully I expressed my wish to join the jihad, and the man said he would see if he could help me.” In fact the man was a recruiter working for Baitullah Mehsud. The Pakistani Taliban leader (who died in a Predator strike a year ago) was notorious for recruiting and using young suicide bombers like Hanif; one of his bombers is thought to have assassinated former Pakistani prime minister Benazir Bhutto.