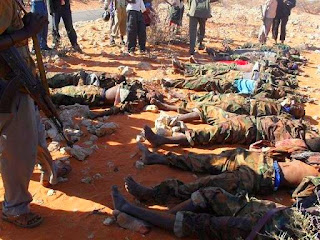 Somali ‘Awakening,’ potential solution to al Shabaab menace  update
At least 10 people mostly fighters were killed in central Somalia during Tuesday battles between Al Shabaab insurgents and the pro-government Ahlu Sunna militia, Local reports said the fighting took place in three villages south of Guri El, a small trading town in Galgadud region of central Somalia.Witnesses reported the violence in War-dhuumo-leh, Dhagah-yale and El Got villages, all located in Galgadud region Galgadud has been the epicenter of violence between Al Shabaab's northbound violent expansion and Ethiopian-backed Ahlu Sunna Wal Jam'ea militias, which control the region's key towns including the provincial capital, Dhusamareb."Our forces attacked Al Shabaab controlled areas after they [Al Shabaab] made military movements," said Sheikh Abdirizak Ashari, spokesman for the pro-government Ahlu Sunna militia.He told Mogadishu radio stations via a telephone interview that no fighters from Ahlu Sunna were killed, but claimed to have killed "many Al Shabaab fighters" during the battles.Al Shabaab's leader in Galgadud region, Sheikh Isse Kabo-kutukade, told reporters that Al Shabaab fighters "defended towns" against Ahlu Sunna attacks and claimed that Al Shabaab "now controls areas formerly controlled by Ahlu Sunna."There were no independent reports to corroborate the two versions from the rival factions, but medical sources in Guri El and Dhusamareb towns controlled by Ahlu Sunna militia told Garowe Online confirmed that "wounded fighters" were rushed in for treatment but did not provide any specific casualty figures.

Pro-government Ahlu Sunna militia is an Islamist faction allied to Somalia's nominal government, the Transitional Federal Government (TFG), which is cornered to a few kilometers of Mogadishu in southern Somalia and protected by 8,000-strong African Union peacekeeping force (AMISOM).
Ahlu Sunna and Al Qaeda-affiliated Shabaab have battled for control over Galgadud region since Nov. 2008.

Dhusamareb — High level delegation from Norway on Tuesday landed the district of Dhusamareb the regional capital of Somalia's central region of Galgudud, where they met with officials from Somali moderate Ahlu Sunna Waljama'.The meeting, which lasted hours, has been mooted several issues, as Sheikh Mohammed Yusuf Hefow, the commissioner of ASWJ's executive commission has attended the meeting on behalf of Ahlu Sunna.Reports from the district of Dhusomareb suggest that the Norwegian delegation imparted several subjects, asking for elaboration.The Norwegians asked ASWJ if the regions and areas particularly Dhusamareb airport which is under the control of Ahlu Sunna forces could be reached and operated, reports said, adding that if Somalia's transitional government troops can operate in those areas.Ahlu Sunna Waljama', which took guns against Al shabaab 2 years ago, welcomed all the subjects displayed Norway, but it declined to invite TFG forces in the areas it controls.ASWJ spelled out it is ready for co-operations with the Norway government.Ahlu Sunna said that they are opposition to Somali government but said that there no concrete military help from TFG during their fighting against Al shabaab.No official statements were immediately available after the end of the meeting and Norwegian delegation flew out of Somalia and back to Kenyan capital Nairobi with especial small airplane.