Dr. Martin Luther King Jr. was honored in an annual event Sunday night that brought together hundreds of people, including a foreign dignitary from Western New York. Somalia Prime Minister and Grand Island resident Mohamed Mohamed made a stop at the celebration organized by the Concerned Citizens Following the Dream Committee. YNN's Kaitlyn Lionti tells more about the event and the message the Prime Minister brings to the United States after his first few months serving his home country.

BUFFALO, N.Y. -- This year's Dr. Martin Luther King Jr. Celebration program featured a special guest. The new Prime Minister of Somalia returned to Western New York and joined in the festivities.
The event drew crowds of people to Kleinhan's Music Hall for musical and dance performances, a keynote speech by reverend Darius Pridgen and more.
This year's theme was "Where do we go from here?" In speaking about his home country, Prime Minister Mohamed Mohamed shared a vision for where his country needs to go.
"Somalian people are a peace-loving people, but of course, they didn't have the government that they trust, that they deserve. So I am here to lead this effort, going back to my motherland, and recruit anyone who can join me in this effort to promote humanity and a better life for everyone," said Mohamed.
During his visit to the United States, Prime Minister Mohamed is asking for support in his country's struggle with terrorism and the presence of an extremist organization linked to Al-Qaeda.
"If they win in Somalia, currently, maybe it's a problem in Somalia, but if they win this war, I'm sure they won't stop in Somalia and they already vowed that they will take their war to the United States and to European Countries," said Mohamed.
The Prime Minister acknowledges the importance of honoring Martin Luther King Jr.'s legacy and says Dr. King is a hero for all who are committed to non-violence and equality.
Mohamed said,"I think he has done and contributed a great thing for humanity and he's a good example for how what he has done, and we should follow his footsteps."
"We have come together in unity and in love. This is what he wanted, and we are trying to live out his dream in some kind of way, and this is our little way of doing it, by bringing people together," said Bessie Patterson, the organizer of the event.
Prime Minister Mohamed made an appeal to the audience at the event, to be ambassadors to Somalia. He asks all Americans to speak to their elected officials about being proactive and working with his home country in its plight.

Somali PM Mohamed Abdullahi Mohamed From Those Who Know Him Best 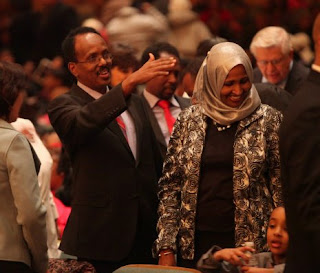 Mohamed Abullahi (Farmajo) a secular Somali-American for PM
Posted by Unknown at 6:15 AM