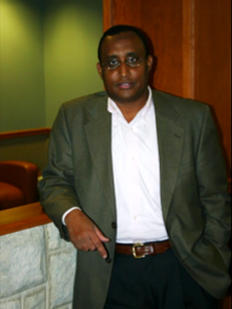 Abdiweli Ali MPA 1999
Photo Credit: Niagara University
“The biggest challenge that Somalia is facing is the collapse of state institutions. The economic infrastructure is completely destroyed. The rule of law is quite tenuous including the emergence of radical groups and piracy,” Ali says. “Twenty years of civil strife is too long and the Somali people are ‘sick and tired of being sick and tired
Abdiweli Ali MPA 1999 has spent his academic career researching economic growth and development, public finance and international trade. In recent years, his focus has shifted primarily to the effect of institutions on economic growth within countries and regions. Now Ali has the opportunity to apply what he has learned as he assumes office as the new Deputy Prime Minister of the Transitional Federal Government of Somalia.

The country has a troubled recent history plagued by the aftereffects of colonialism, religious conflict and civil war. But now, the nation is experiencing a relative peace as the new government takes shape and new leaders emerge to tackle the many economic and political challenges facing it, its citizens, and its neighbors.

“The biggest challenge that Somalia is facing is the collapse of state institutions. The economic infrastructure is completely destroyed. The rule of law is quite tenuous including the emergence of radical groups and piracy,” says Ali, who also serves as the nation’s Minister of Planning and International Cooperation. “Twenty years of civil strife is too long and the Somali people are ‘sick and tired of being sick and tired.’”

Ali was born and raised in Somalia and attended Somali National University in Mogadishu as an undergraduate student. His mother still lives there, as do his brothers and sisters. Supplemental to his work as an associate professor of economics at Niagara University, Ali has spent much time in his native country in recent years, assisting with public finance management and helping draft the nation’s Reconstruction and Development Plan (RDP) on the heels of the disruptive civil war.

Somalia’s transitional government has much work to do, Ali says, especially in the area of security and national reconciliation.

“The new government has a strategic vision to fight all extreme elements in Somalia. The new government is training a new Somali army with the help of additional forces from the African Union funded by the United Nations and other stakeholders of Somalia,” he says. “We are also undertaking national reconciliation efforts to unite the Somali people and to inculcate in them that the preservation of Somali unity is of paramount importance. Only with unity can Somalia come back to its former self.”

Ali, who received the Joel Leff Fellowship while at HKS, believes that his work in Mogadishu will be enhanced by his Kennedy School education, saying that his time at Harvard was “instrumental on my political outlook, particularly in my perspective on the economical and political challenges facing developing countries including fragile states like Somalia.”

He fondly recalls serving as a Teaching Fellow for then-professor David T. Ellwood and former professor Theodore Panayotou, and he remarks how the Forum speaker series affected him profoundly, allowing he and other students to hear from and meet with many esteemed world leaders in an intimate setting.

Despite the tremendous obstacles facing the country, Ali is confident that stability is attainable, economic development can occur, and Somalia could become a thriving African nation once again.

“I have a realistic expectation that the situation in Somalia will improve soon and quickly…I am quite confident that Somalia will soon be back to the community of nations,” he says.