Somali community in Bonn were celebrated a welcomed returning of the Somali embassy in Germany.

The ambassador of Somali embassy in Bonn Mohamud Mohamed said that “we were very happy to get back our embassy to Germany who ware sold to Germany by the former ambassador to Germany so we will get it.

This is the second embassy to returns hand of government since 1991.

“It is uninhabitable, so we have to renovate it then we will move in," said Ambassador Mohamud Mohamed Tifow. 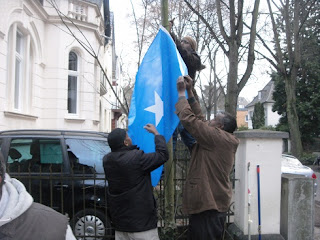 A court in Germany has ruled that a former Somali embassy building, sold off after the collapse of the Somali government was illegally sold.

When the government of then President Siad Barre collapsed in 1991, civil strife engulfed the country and all the diplomatic ties with foreign governments ceased.

, The Horn of Africa nation has been plagued by chaos and clan-based civil war since when hawiye Warlordism, terrorism. PIRATESM ,(TRIBILISM) Replaces the Honourable Somali President Mohamed Siad Barre administration .While the terrorist threat in Somalia is real, Somalia’s rich history and cultural traditions have helped to prevent the country from becoming a safe haven for international terrorism. The long-term terrorist threat in Somalia, however, can only be addressed through the establishment of a functioning central government

Good News of the Day :Somalia embassy sale voided. It's it illegal selling government assetts ..we live in civilized world,