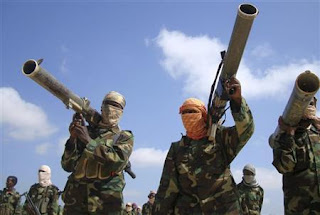 ADDIS ABABA (Reuters) - The Australian foreign ministry has warned that extremists are planning bomb attacks on Ethiopia's capital Addis Ababa during an African Union summit there starting this week.

A Western diplomat in Addis Ababa said the information his colleagues had was that Somali militants might be planning attacks on the city.Ethiopia invaded Somalia in late 2006 to oust an Islamist administration based in the capital Mogadishu, driving the Islamists into southern Somalia, where they regrouped and launched an insurgency against the new government.Ethiopia withdrew its troops in early 2009 but the insurgency is still raging and the government, though supported by Western nations, the United Nations and the African Union, controls little territory.Australia's Department of Foreign Affairs and Trade updated its travel advice for Ethiopia on its website on Tuesday to include the following warning:"According to credible information, extremists are planning to bomb unspecified locations within Addis Ababa, Ethiopia, during the Africa Union Summit."No further information was immediately available.Al Shabaab, the biggest militant group in Somalia, has carried out attacks outside its own country in the past.
In July 2010 the group said it had carried out two bomb attacks in Uganda, killing 74 soccer fans watching the football World Cup final on television in a restaurant and a rugby club in the capital Kampala.
Al Shabaab threatened to carry out further attacks on Uganda and Burundi unless the two nations withdrew their troops from the AU peacekeeping force protecting the government in Mogadishu.